Saga of the Nuclear West 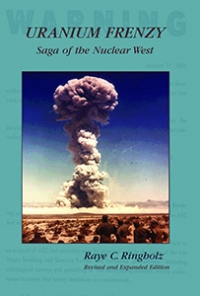 "In a perceptive and touching narrative, Ringholz (The Wilderness Handbook) recalls that the Federal government in the early 1950s subsidized uranium mining for the coming atomic age. . . . Ringholz intrigues the reader with an expert blending of science, adventure, industry mania, finance, human triumph and despairand shameful official neglect."
—Library Journal

"The frenzied search for a reliable domestic source of uranium ore needed by the U.S. Atomic Energy Commission in the 1950s is the subject of Ringholz's breezy narrative, which is populated with colorful characters. When Charlie Steen, a young, penniless geologist, struck it rich with a large find of high-grade uranium ore, the treasure hunt was off in the Colorado deserts. The fortune-seekers included solid prospectors, engineers, and financiers, but also get-rich-quick con artists and promoters of dubious penny uranium stocks. Some became overnight millionaires; many went broke. The real losers were the miners suffering from lung cancer from the deadly radon gas in the mines. This is good popular reading for general collections in public libraries."
—Harry Frumerman

Now expanded to include the story of nuclear testing and its consequences, Uranium Frenzy has become the classic account of the uranium rush that gripped the Colorado Plateau region in the 1950s. Instigated by the U.S. government's need for uranium to fuel its growing atomic weapons program, stimulated by Charlie Steen's lucrative Mi Vida strike in 1952, manned by rookie prospectors from all walks of life, and driven to a fever pitch by penny stock promotions, the boom created a colorful era in the Four Corners region and Salt Lake City (where the stock frenzy was centered) but ultimately went bust. The thrill of those exciting times and the good fortune of some of the miners were countered by the darker aspects of uranium and its uses. Miners were not well informed regarding the dangers of radioactive decay products. Neither the government nor anyone else expended much effort educating them or protecting their health and safety. The effects of exposure to radiation in poorly ventilated mines appeared over time.

The uranium boom is only part of the larger story of atomic weapons testing and its impact in the western United States. Nuclear explosions at the Nevada Test Site not only spurred uranium mining, they also had a disastrous impact on many Americans: downwinders in the eastward path of radiation clouds, military observers and guinea pigs in exposed positions, and Navajo and other uranium mill workers all became victims, as deaths from cancer and other radiation-caused diseases reached much higher than normal rates among them. Tons of radioactive waste left by mines, mills, and the nuclear industry and how to dispose of them are other nagging legacies of the nuclear era. Recent decades have brought multiple attempts by victims to obtain compensation from the federal government and other legal battles over disposal of nuclear waste. When courts refused to grant relief to downwinders and others, Congress eventually interceded and legislated compensation for a limited number of victims able to meet strict criteria, but did not adequately fund the program. Recently, Congress attempted to fix this shortfall, but in the meantime many downwinders and others holding compensation IOUs had died. Congressional and other efforts to dispose of waste have lately focused on Nevada and Utah, two states all too familiar with nuclear issues and reluctant to take on further radioactive burdens.

Raye C. Ringholz is also the author of Paradise Paved: The Challenge of Growth in the New West; On Belay: The Life of Legenday Mountaineer Paul Petzoldt; Little Town Blues: Voices from the Changing West; and other books. Her articles have appeared in such periodicals as Field and Stream, Westways, and Utah Holiday. She lives in Park City, Utah.