Death and Humor in Folkore and Popular Culture 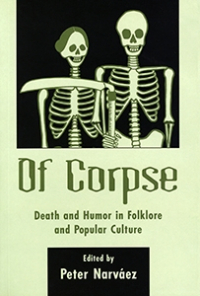 I'm going to take you out of the parade, if you don't stop dragging your cross.

Q: When does a border guard fire his first warning shot?
A: End of the second clip.

Q: What is the Taliban's national bird?
A: Duck.

Osama bin Laden announced today that he will give up terrorism to become a TV chef. For his first programme, he'll be showing us how to make a Big Apple Crumble.

Laughter, contemporary theory suggests, is often aggressive in some manner and may be prompted by a sudden perception of incongruity combined with memories of past emotional experience. Given this importance of the past to our recognition of the comic, it follows that some "traditions" dispose us to ludic responses. The studies in Of Corpse: Death and Humor in Folklore and Popular Culture examine specific interactions of text (jokes, poetry, epitaphs, iconography, film drama) and social context (wakes, festivals, disasters) that shape and generate laughter. Uniquely, however, the essays here peruse a remarkable paradox—the convergence of death and humor.

Two studies here focus on joke cycles concerning disasters and celebrities, particularly as spawned or mediated through television and the Internet. One offers an exhaustive look at Internet humor that followed September 11, and the other interprets the influence of television as especially fertile for the proliferation of humor about mass icons and disasters. Other essays examine the social leveling through laughter at festivals and calendar customs associated with Mexican Day-of-the-Dead traditions, and another highlights the role of the Haitian family of playful, erotic death spirits known as Gedes during Carnival. A chapter on The Grateful Dead shows how the folkloric name and ludic iconography of this rock band nurtured participatory, egalitarian cultural scenes of collective merriment. Another essay inspects Weekend at Bernie's, a film employing the humorous manipulation of a corpse—a time-honored folk motif also explored in chapters on the "Irish wake" and the "merry wake." In another essay, we saunter through the contemporary American cemetery, noting the instances and import of humor in gravemarker texts.

Taken together these essays provide a wide variety of interpretations for complex expressive forms that link death and humor, and that appear to unite groups through their own aesthetics of laughter. By letting down their guard together when encountering communications normally judged as unpleasant, people collectively affirm their own taste and "sense" of humor, in the face of official culture and even death itself.

Peter Narváez is an honorary research professor of folklore at Memorial University of Newfoundland. His writing has appeared in a wide variety of folklore and behavioral science journals and he has edited three major collections of essays. He served as president of the Folklore Studies Association of Canada and of the Association for the Study of Canadian Radio and Television. He received the Marius Barbeau Medal from the Folklore Studies Association of Canada in 2006.