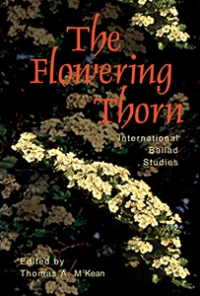 A project of the Kommission für Volksdichtung and the Elphinstone Institute

"The Flowering Thorn expresses the dual nature of the ballad: at once a distinctive expression of European tradition, but also somewhat tricky to approach from a scholarly perspective, requiring a range of disciplines to illuminate its rich composition. Most of this latter quality has to do with the very features that characterize ballads . . . or narrative songs. These include an appearance of fragmentation; a wide range of cultural and social referents; complex, evocative symbolic language; and variation. The notable multiformity of meaning, text and tune is mirrored in scholarship, too. The Flowering Thorn is therefore wide ranging, with articles written by world authorities from the fields of folklore, history, literature, and ethnology, employing a variety of methodologies—structuralism to functionalism, repertoire studies to geographical explorations of cultural movement and change. The twenty-five selected contributions represent the latest trends in ballad scholarship, embracing the multi-disciplinary nature of the field today. The essays have their origins in the 1999 International Ballad Conference of the Kommission fur Volksdichtung (KfV), which focused particularly on ballads and social context; performance and repertoire; genre, motif, and classification. The revised, tailored, and expanded essays are divided into five sections—the interpretation of narrative song; structure and motif; context, version, and transmission; regions, reprints, and repertoires; and the mediating collector's offering a range of examples from fifteen different cultures, ten of them drawing on languages other than English, resulting in a series of personal journeys to the heart of one of Europe's richest, most enduring cultural creations."
—Thomas McKean, from the Introduction

Thomas McKean is a folklorist specializing in Scots and Gaelic song, along with custom and belief, and fieldwork methodology.