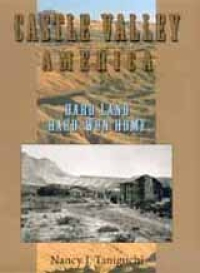 This is American history told through the stories of one of Utah's most singular regions. Castle Valley is roughly conterminous with two counties, Carbon and Emery, which together formed a rural, industrial enclave in a mostly desert environment behind the mountain range that borders Utah's principal corridor of settlement. In Castle Valley, coal mining and the railroad attracted diverse, multiethnic communities and a fair share of historic characters, from Butch Cassidy, who stole its largest payroll, to Mother Jones, who helped organize its workers against its mining companies. Among the last major segments of the state to be settled, it was also a generally poor region that stretched the capabilities of people to scratch a living from a harsh landscape.

The people of Castle Valley experienced complex, unusual combinations of social cohesion and conflict, struggling through poverty, labor disputes, major mining disasters, and other challenges to build communities whose stories reflected the historical course of the nation as a whole. In order to convey her subject's unique and generally representative qualities, Nancy Taniguchi has written an epic history that is not just local history, but American history written locally.

Nancy J. Taniguchi, who lived for thirteen years in Castle Valley and was previously on the faculty of the College of Eastern Utah in Price, is professor of history at California State University, Stanislaus. She is the author of numerous published articles in mining, legal, women's, western, and Utah history and of one book, Necessary Fraud: Progressive Reform and Utah Coal.