Recollections of a Trader

by Will Evans, edited by Susan E. Woods and Robert McPherson 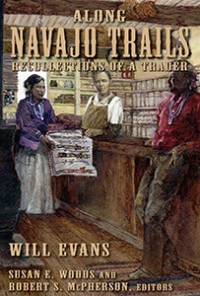 Will Evans's writings should find a special niche in the small but significant body of literature from and about traders to the Navajos. Evans was the proprietor of the Shiprock Trading Company. Probably more than most of his fellow traders, he had a strong interest in Navajo culture. The effort he made from 1898-1948 to record and share what he learned certainly was unusual. He published in the Farmington and New Mexico newspapers and other periodicals, compiling many of his pieces into a book manuscript. His subjects were Navajos he knew and traded with, their stories of historic events such as the Long Walk, and descriptions of their culture as he, an outsider without academic training, understood it. Evans's writings were colored by his fondness for, uncommon access to, and friendships with Navajos, and by who he was: a trader, folk artist, and Mormon. He accurately portrayed the operations of a trading post and knew both the material and artistic value of Navajo crafts. His art was mainly inspired by Navajo sandpainting. He appropriated and, no doubt, sometimes misappropriated that sacred art to paint surfaces and objects of all kinds. As a Mormon, he had particular views of who the Navajos were and what they believed and was representative of a large class of often-overlooked traders. Much of the Navajo trade in the Four Corners region and farther west was operated by Mormons. They had a significant historical role as intermediaries, or brokers, between Native and European American peoples in this part of the West. Well connected at the center of that world, Evans was a good spokesperson.

Will Evans did not publish his book in his lifetime, but his granddaughter Susan Evans Woods reached that goal with the assistance of historian Robert McPherson, who has authored numerous books on Navajo and Four Corners history. Their edition is illustrated with an equally significant, rare selection of photos from the collections of Evans and his colleagues.