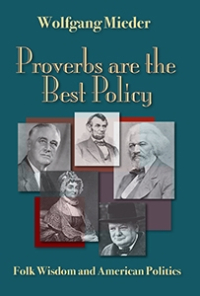 Widely considered the world's greatest living proverb scholar and known as the author of, among numerous other books, the Encyclopedia of World Proverbs and the coeditor of A Dictionary of American Proverbs, Wolfgang Mieder has brought particular attention and understanding to the uses of proverbs in politics. In this new collection of eight essays, he considers the role of proverbial speech in the American political scene from the Revolutionary War to the present.

Mieder introduces this survey with an examination of what characterizes American proverbs, their origins, and how they have spread internationally with the expansion of America's political role. He then turns to the origins and varied historical uses of what has become the defining proverb of American democracy: "government of the people, by the people, for the people." The employment of proverbs had no brighter exponent among the nation's founding generation than Abigail Adams, who was not without influence despite the exclusion from political office of women. As they have for so much, her abundant letters provide rich sources for politically charged proverbs.

Though it is especially associated with Abraham Lincoln, "a house divided against itself cannot stand" is a biblical proverb that has proven of wide value as a political expression. Frederick Douglass's proverbial prowess paralleled that of his contemporary Lincoln, and he employed it effectively in his battle for civil rights. Given proverbs' enduring role in American politics, it is an interesting exercise to compare how United States presidents have employed them in their inaugural addresses, which have produced such gems as John F. Kennedy's "ask not" dictum. The bonds Franklin Roosevelt and Winston Churchill formed through the World War II alliance were expressed in the proverbial language that frequently enlivened their correspondence. Having addressed these aspects of the proverb in American politics, Mieder winds up by considering the sociopolitical significance of the ambiguous proverb "good fences make good neighbors."