The Quest for a Plausible Harmony 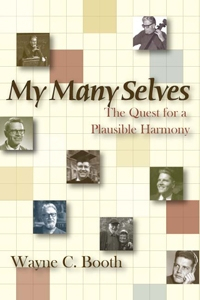 Wayne Booth, George M. Pullman Distinguished Service Professor of English at the University of Chicago, was one of the most important literary critics and English scholars of recent times. His books included The Rhetoric of Fiction; Now Don't Try to Reason with Me: Essays and Ironies for a Credulous Age; A Rhetoric of Irony; Modern Dogma and the Rhetoric of Assent; Critical Understanding: The Powers and Limits of Pluralism; The Company We Keep: An Ethics of Fiction; The Vocation of a Teacher; For the Love of It: Amateuring and Its Rivals; The Rhetoric of Rhetoric: The Quest for Effective Communication; and others. Many of them became required reading in college classrooms.

His memoir, My Many Selves, is both an incisive self-examination and a creative approach to retelling his life. Writing his autobiography became a quest to harmonize the diverse, discordant parts of his identity and resolve the conflicts in what he thought and believed. To see himself clearly and whole, he broke his self down, personified the fragments, uncovered their roots in his life, and engaged his multiple identities and experiences in dialogue. Basic to his story and to its lifelong concerns with ethics and rhetoric was his youth in rural Utah. He valued that background, while acknowledging its ambiguous influence on him, and continued to identify himself as Mormon, though he renounced most Latter-day Saint doctrines.

Wayne Booth died in October 2005, soon after completing work on his autobiography.

The Association for Mormon Letters, 2009