May Swenson's Work and Life 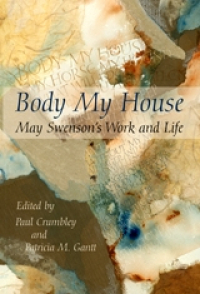 "A marvelous collection about a major national poet with a large and devoted audience. . . . Just looking at the table of contents makes one's heart leap."
—Steven Gould Axelrod, coeditor of The New Anthology of American Poetry: Modernisms 1900-1950

"The collection provides a much-needed view of both Swenson's unique voice and achievement and her place within the tradition of poetry. Scholarly without being obscure, it is accessible to the lay reader. As such, it should appeal to multiple audiences: librarians, professors, students of poetry, and long established Swenson fans, of whom there are many outside the academy."
—Gardner McFall, editor of Made with Words by May Swenson

The first collection of critical essays on May Swenson and her literary universe, Body My House initiates an academic conversation about an unquestionably major poet of the middle and late twentienth century. This volume includes many previously unpublished Swenson poems.

Essays here address the breadth of Swenson's literary corpus and offer varied scholarly approaches to it. They reference Swenson manuscripts—poems, letters, diaries, and other prose—some of which have not been widely available before. Chapters focus on Swenson's work as a nature writer; the literary and social contexts of her writing; her national and international acclaim; her work as a translator; associations with other poets and writers (Bishop, Moore, and others); her creative process; and her profound explorations of gender and sexuality. The first full volume of scholarship on May Swenson, Body My House suggests an ambitious agenda for further work.

Between the 1950s and the 1980s, May Swenson produced eleven volumes of poetry, received many major awards, was elected chancellor of the Academy of American Poets, and was acclaimed by writers in virtually every school of American poetry.

Paul Crumbley is associate professor of English and American studies at Utah State University. Author of Inflections of the Pen: Dash and Voice in Emily Dickinson (1997) and co-editor with Melody Graulich of The Search for a Common Language: Environmental Writing and Education (2005), he has recently published essays on Emily Dickinson and Elizabeth Stoddard. He is currently completing a book on Dickinson and politics.

Patricia M. Gantt is professor of English at Utah State University. She has published numerous essays of literary analysis, as well as essays on teaching methods and English education. Recent books include two collections co-edited with Lynn Langer Meeks, Teaching Ideas for 7-12 English Language Arts: What Really Works (2004) and Teaching Ideas for University English: What Really Works (2004). She is currently completing a book on the Federal Writers' Project.