A Route for the Overland Stage 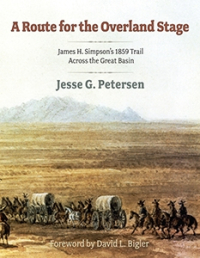 The 1859 exploration of the Great Basin by army topographical engineer James Simpson opened up one of the West's most important transportation and communication corridors, a vital link between the Pacific Coast and the rest of the nation. It became the route of the Pony Express and the Overland Mail and Stage, the line of the Pacific telegraph, a major wagon road for freighters and emigrants, and, later, the first transcontinental auto road, the Lincoln Highway, now Highway 50.

No one has accurately tracked or mapped Simpson's original route, until now. Jesse Petersen shows in words, maps, and photos exactly where the explorer went. Sharing his detective-like reasoning as he walked or drove the entire trail west and Simpson's variant route returning east, Petersen takes readers on a mountain and desert trek through some of America's most remote and striking landscapes.