Utah in the Twentieth Century 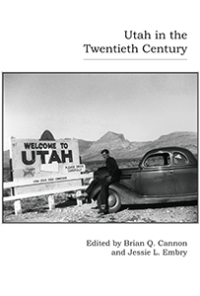 A project of the Charles Redd Center for Western Studies

"[A] substantial contribution to a neglected century of Utah history."

The twentieth could easily be Utah's most interesting, complex century, yet popular ideas of what is history seem mired in the nineteenth. One reason may be the lack of readily available writing on more recent Utah history.

This collection of essays shifts historical focus forward to the twentieth, which began and ended with questions of Utah's fit with the rest of the nation. In between was an extended period of getting acquainted in an uneasy but necessary marriage, which was complicated by the push of economic development and pull of traditional culture, demand for natural resources from a fragile and scenic environment, and questions of who governs and how, who gets a vote, and who controls what is done on and to the contested public lands. Outside trade and a tourist economy increasingly challenged and fed an insular society. Activists left and right declaimed constitutional liberties while Utah's Native Americans become the last enfranchised in the nation. Proud contributions to national wars contrasted with denial of deep dependence on federal money; the skepticism of provocative writers, with boosters eager for growth; and reflexive patriotism somehow bonded to ingrained distrust of federal government.

The Association for Mormon Letters, 2010, by Russell Y. Anderson

Brian Q. Cannon is associate professor of history and director of the Charles Redd Center for Western Studies at Brigham Young University and author of Remaking the Agrarian Dream: New Deal Rural Resettlement in the Mountain West.

Jessie L. Embry is the associate director of the Charles Redd Center for Western Studies and an associate research professor at Brigham Young University. She is the author of eight books and over 100 articles on oral history, western American history, and ethnic Mormon history.