Between Pulpit and Pew

The Supernatural World in Mormon History and Folklore 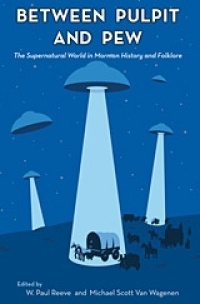 "It is significant that historians have chosen to better understand the history of Mormons by looking at their folklore, including their expressions of the supernatural. . . . Some historians might have viewed these legends as peripheral to the main story of the church and its members, but here we see that they help fill out and give form to the story."
—From the Foreword by Elaine Thatcher

Cain wanders the frontier as a Bigfoot-like hairy beast and confronts an early Mormon apostle. An evil band of murderers from Mormon scripture, known as the Gadianton robbers, provides an excuse for the failure of a desert town. Stories of children raised from the dead with decayed bodies and damaged minds help draw boundaries between the proper spheres of human and divine action. Mormons who observe UFOs in the nineteenth and twentieth centuries find ways to explain them in relation to the church’s cosmology. The millenarian dimension of that belief system induces church members to invest in the Dream Mine, a hidden treasure that a would-be heir to Joseph Smith wraps in prophecy of the end times. A Utah version of Nessie haunts a large mountain lake. Non-Mormons attempt to discredit Joseph Smith with tales that he had tried and failed to walk on water.

Mormons gave distinctive meanings to supernatural legends and events, but their narratives incorporated motifs found in many cultures. Many such historical legends and beliefs found adherents down to the present. This collection employs folklore to illuminate the cultural and religious history of a people.

W. Paul Reeve is associate professor of history at the University of Utah, where he teaches Utah history, Mormon history, and history of the US West. His publications include Mormonism: A Historical Encyclopedia, which he co-edited.

Michael Scott Van Wagenen is a documentary filmmaker and assistant professor of history at the University of Texas at Brownsville. He is the author of The Texas Republic and Mormon Kingdom of God.