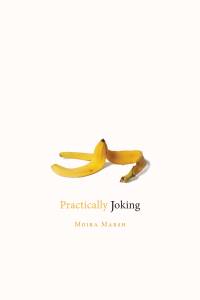 "Much can be said about how practical jokes unspool society, forcing us to question the phenomenology of unlaughter and of jokes as praxis. Marsh provides a valuable platform to spark these discussions in a well-played volume."

"Given the prejudices regarding the supposed social and cultural insignificance of the subject matter, it is that much more rewarding to be treated with Marsh's insightful, high-class research. An exquisitely compact yet accessibly composed read."
—Elore

"[A] detailed and expert overview of practical joking. . . .​ very valuable."

"Not only is the data geographically and temporally diverse, but the research that informs Marsh’s approach to the data is also wide-ranging: folklore, psychology, humor theory, sociology, anthropology, etc. Grounded in accounts of practical jokes, the book shows that the genre and its peculiarities originate within relationships, reflecting the positions of jokers, butts, and audiences. . . . the book is of undoubted value."

"Marsh shows​ ​that the practical joke most certainly is a form of folk play, if not folk art, that demands serious​ ​study—not simply to defend it or to disparage it, but to understand the genre’s role in culture, the​ ​psychology of the trickster, the feelings of the target, and the relations between the trickster and​ ​target. She has gone a long way in accomplishing these things, but her real contribution to the​ ​study of folklore, popular culture, and humour is the texts and contexts of a variety of practical​ ​jokes that she collected for around thirty years and put together in a single book.​"

"​[A] rousing success. Marsh convincingly argues that practical jokes are a rich subject of study that highlight, interrogate, and sometimes subvert subtle undercurrents in social life and public culture. . . . Practically Joking remains a substantial​ ​achievement that illuminates a previously​ ​understudied subject integral to the​ ​history of play and the study of humor."

"​Marsh’s close examination of various types of jokes (and specific​ ​examples) reveals a wealth of insight about the individuals, folk groups, and larger​ ​social groups involved.​ ​. . . ​Her analysis of the rhetoric of humor​ ​support also provides an interesting linkage between rhetoric and humor study;​ ​scholars in both fields would benefit from reviewing her work. As a whole, the book​ ​provides an excellent defense of the practical joke as a thoughtful and artful act that​ ​responds to and reinforces group dynamics​."

“In addition to being a natural contribution to both humor studies and folklore scholarship, this book should also find a place in the conversation on aesthetics.”
—Journal of American Folklore

In Practically Joking, the first full-length study of the practical joke, Moira Marsh examines the value, artistry, and social significance of this ancient and pervasive form of vernacular expression.

Though they are sometimes dismissed as the lowest form of humor, practical jokes come from a lively tradition of expressive play. They can reveal both sophistication and intellectual satisfaction, with the best demanding significant skill and talent not only to conceive but also to execute. Practically Joking establishes the practical joke as a folk art form subject to critical evaluation by both practitioners and audiences, operating under the guidance of local aesthetic and ethical canons.

Marsh studies the range of genres that pranks comprise; offers a theoretical look at the reception of practical jokes based on "benign transgression"—a theory that sees humor as playful violation—and uses real-life examples of practical jokes in context to establish the form’s varieties and meanings as an independent genre, as well as its inextricable relationship with a range of folklore forms. Scholars of folklore, humor, and popular culture will find much of interest in Practically Joking.

Moira Marsh is the subject librarian for anthropology, sociology, folklore, and comparative literature at the Indiana University Bloomington Libraries. She holds a PhD in folklore from Indiana University, and her research on practical jokes, cross-cultural approaches to laughter, and humor theory has been published in folklore journals, textbooks, and encyclopedias.