The Theory, Analysis, and Aesthetics of Humor 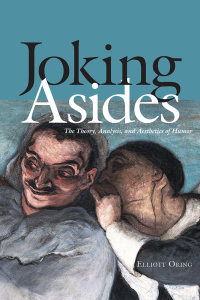 Member Institution Access
"A most valuable, indeed quite outstanding, contribution to the study of humor in general, and jokes in particular, by one of the leading humor scholars of the English-speaking world.”

"Theoretically sophisticated, cogently argued, and always attentive to the ways that jokes operate in real-life social contexts, Elliott Oring’s Joking Asides is a critical tour de force—a stimulating contribution to the discourse in humor studies from one of the foremost scholars in the field."

​"[F]a​r ​from being ​'merely​' a collection of essays, the book is one whole​, ​and worth reading from beginning to end.​"

"[Oring] never takes any theory at face value, no matter how popular or ingenious it is. Neither does he dismiss any theory that he disagrees with out of hand, but he seriously engages with all of them, with evidence and cogent, detailed argument. In the specific examples as well as in its general approach, this book is a model for all folklorists and humor scholars to follow."

"[A] very accessible book even for readers that are not specialists in the subject, both in terms of the terminology used (all of which is carefully explained) and of content (clearly and transparently presented). ​. . . very valuable reading recommended for anyone willing to acquire a broad perspective on humour research and to be exposed to exemplary and acute critical reasoning."

"Joking Asides is an extremely readable and teachable volume, in which Oring continues to do invaluable work in making humor theory useful to contemporary scholars in a variety of disciplines."
—Journal of Popular Culture

“[O]ne of the most important—and I hope also the most influential—contributions to humor studies to have appeared worldwide in the last few decades.”
—Contemporary Legend

“It remains undeniable that Joking Asides is but one more confirmation of Oring’s status as one of our leading theoreticians.”
—Humor

“An excellent book for cross-disciplinary teaching for undergraduate and graduate classes.”
—Journal of Royal Anthropological Institute

Nothing in the understanding of humor is as simple as it might seem. In Joking Asides, Elliott Oring confronts the problems of humor, analyzing the key contemporary approaches to its study and addressing controversial topics with new empirical data and insights.

A folklorist drawn to the study of humor, Oring developed his formulation of “appropriate incongruity” as a frame to understand what jokes must do to produce humor. He tests appropriate incongruity against other major positions in the field, including the general theory of verbal humor, conceptual integration theory, benign violation theory, and false-belief theory. Oring draws on the work of scholars from several disciplines—anthropology, folklore, philosophy, psychology, linguistics, and literature—to ask basic questions about the construction and evolution of jokes, untangle the matter of who the actual targets of a joke might be, and characterize the artistic qualities of jokes and joke performances.

Although Oring guides the reader through a forest of jokes and joke genres, this is not a joke book. A major work from a major scholar, Joking Asides is a rigorous exploration of theoretical approaches to jokes and their functions and is filled with disquieting questions, penetrating criticisms, and original observations. Written in a clear and accessible style, this book will prove valuable to any scholar or student who takes matters of jokes and joking seriously.

Elliott Oring is professor emeritus of anthropology at California State University, Los Angeles, and serves on the editorial boards of Humor: International Journal of Humor Research and Journal of Folklore Research. He has written extensively about humor, folklore, and cultural symbolism.