A Mission for Development

Utah Universities and the Point Four Program in Iran 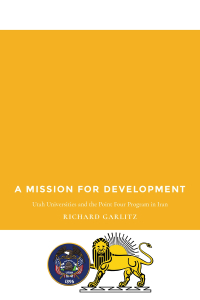 "This nuanced study of the US Point Four Program in Iran during the 1950s and early 1960s should be read by all those seeking a fuller understanding of US-Iran relations in the early post-WWII years."
—James Goode, Grand Valley State University and Peace Corps in Iran, 1968–1971

A Mission for Development tells the remarkable story of faculty from three Utah universities who lived and worked in Iran as part of the Point Four Program. Using the experience of these advisers, the book reexamines the rise and fall of the US-Iranian alliance and explores the roles that American universities played in international development during the Cold War.

The Point Four Program sponsored American technical assistance for developing countries during the 1950s—an American Cold War strategy to cultivate friendly governments and economic development in countries purportedly susceptible to Communist influence. Between 1951 and 1964, advisers from Brigham Young University sought to modernize Iranian public education, experts from Utah State University worked to improve agricultural production, and doctors and nurses from the University of Utah helped with the Iranian government’s rural health initiatives. In A Mission for Development, author Richard Garlitz offers a critical and clear-eyed assessment of the challenges the Utahns faced and the contributions they made to Iranian development.

The book also reexamines the Iranian political crisis of the early 1950s and the overthrow of Prime Minister Mohammad Mossadegh through the eyes of the Utah advisers. A Mission for Development provides rare insight into the role of these universities in international development and will be of interest to historians and policy makers.

Richard Garlitz is associate professor of history at the University of Tennessee at Martin, where he teaches courses on the history of United States foreign relations and the Middle East. He is coeditor of Teaching America to the World and the World to America: Education and Foreign Relations since 1870.