Figure 1. An example of an individual household’s temporary altar to the Corn God, consisting of burning copal and indigenous crosses, Lake Chicabal, Guatemala (photograph by the author).

Some may see Palm Sunday and Easter religious processions across the Guatemalan highlands as strictly Catholic, but things that appear one way may actually be another.

It’s been a cooler, wetter winter than usual. I’m so thankful for the rain, as our spring in Tucson has been beautiful and I’m enjoying the abundant colors from all the happy flowers, trees, and other plants. Watching the flowering of plants in the spring, the fact that Lent, Palm Sunday, and Easter—celebrating Christian notions of rebirth—fall at this time of year is no surprise.

This time last year my wife, Jill, and I were in Guatemala, leading a service trip of around twenty volunteers for a nonprofit we work with called Xela AID Partnerships in Self Reliance. The trip ended in Antigua, the colonial capital of Guatemala, on Palm Sunday, which is an amazing event to see and experience. Devout Catholics create elaborate “rugs” that consist of flower petals, sawdust, seeds, and other organic materials and depict scenes of religious importance and display them in the streets along a procession route. Early on Palm Sunday (as well as a week later, on Easter), processions snake through the streets of Antigua, with purple- and white-robed church members carrying massive colorful wooden floats on dozens of shoulders, making music with brass bands, and creating copious smoke by burning incense. The multitude of people pushing toward the procession, to catch even a glimpse, is impressive. Of course, you must be careful of the hundreds of people immediately surrounding you along the procession route, as well as of pickpockets (as I unfortunately came to learn). It really was an amazing experience (my stolen wallet aside).

Some may see these processions across the Guatemalan highlands as strictly Catholic, but things that appear one way may actually be another. In many indigenous Maya communities there are parallel or hybridized connections between indigenous belief systems and those introduced by colonizing powers, leading to what is referred to as syncretism, the merging of religious traditions. We see these deep connections between traditional Maya belief systems and Catholic rituals in Guatemala. Events during Easter and Holy Week in the highlands highlight some of this syncretism.

As one example, the highland Guatemalan village where Jill and I work with Xela AID sits directly below or near a number of volcanoes, one of which is a crater lake, long dormant. This lake, called Laguna Chicabal, is the place of origin for Mam-speaking Maya and is sacred to people in the village. Each year, forty days after Easter, local Maya converge on the high-elevation lakeshore to burn copal (a traditional type of incense), light candles, and place flowers along the edge of the lake to bring good luck for the upcoming rainy season (figure 1). This celebration takes place in part to honor the Corn God, who brings good health and prosperity to families through those rains and subsequent healthy crops. Some in the community draw connections between the resurrection of Jesus during Easter and the arrival of rain and the planting of corn soon afterward.

In another example, whole communities, as well as individuals, across the highlands believe in the power of hybrid deity San Simon, also known as Maximon. In four communities across the highlands, cofradias (religious brotherhoods) take care of Maximon, represented by a life-size wooden effigy to whom people offer patronage by presenting gifts such as tobacco, alcohol, candles, flowers, and food in exchange for receiving good luck and good health (figure 2). Maximon is known to “consume” these gifts offered to him, as these effigies (and related masks) all have an open mouth to receive cigars or cigarettes. During Holy Week, Maximon is part of the religious processions in some communities, the same processions that also include traditional Catholic statues. In some communities Maximon is transformed during Holy Week into Judas and hanged by a rope overnight until he once again becomes Maximon. In addition to community-wide traditions concerning Maximon, individual households and businesses may also maintain a shrine to him (figure 3). 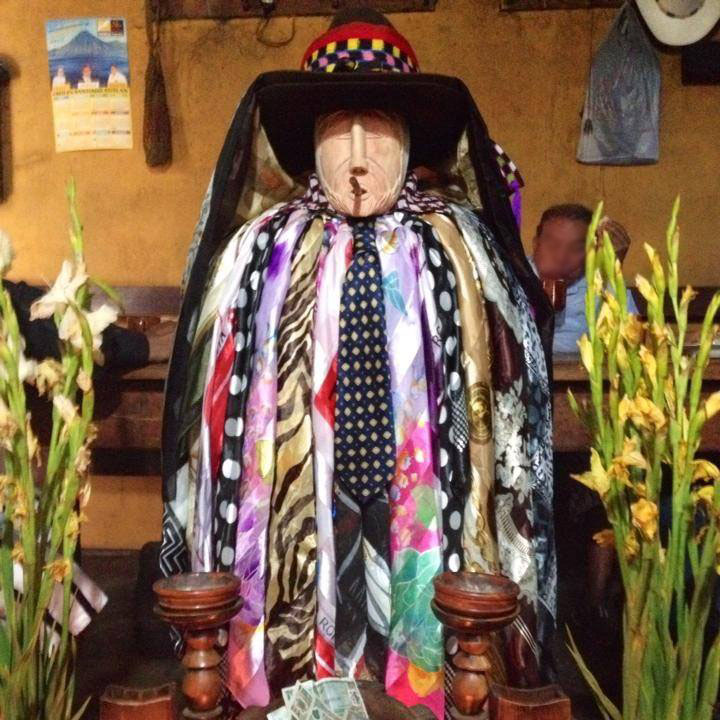 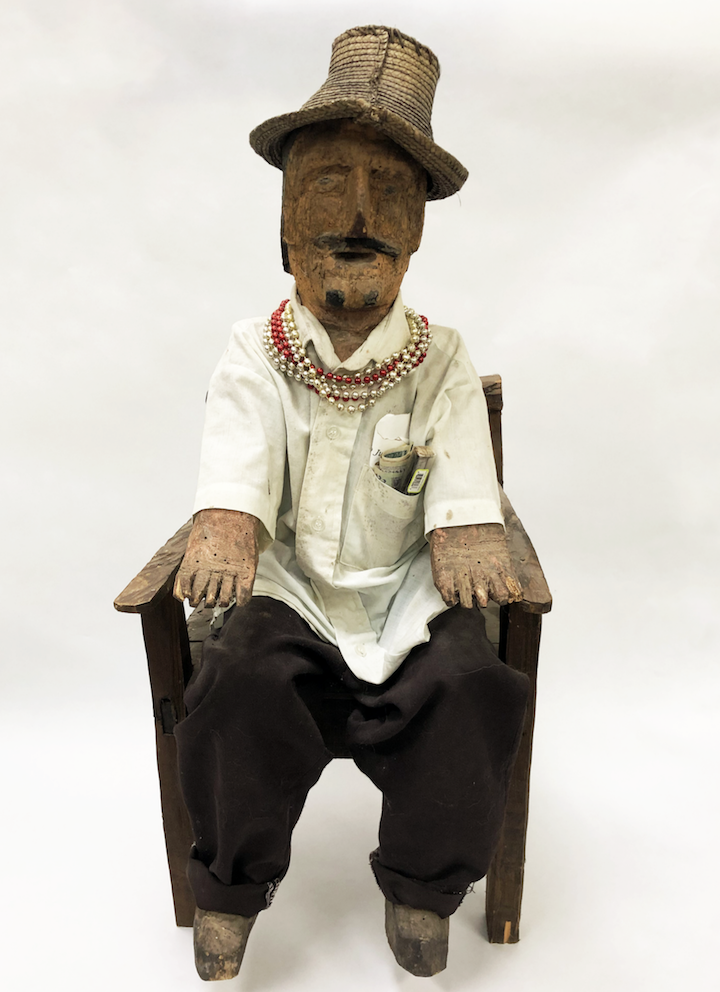 Figure 3. An example of a household Maximon deity, from the author’s personal collection (photograph by Jacquelyn Dominguez).

Getting to know these ceremonies and deities through the lens of indigenous friends in the community has been fascinating. These traditions are good examples of religious syncretism. Many of our friends in the community live two simultaneous spiritual lives, one traditionally Maya and one embracing religions introduced during the conquest period and after, such as Catholicism or one of a wide variety of protestant religions. While some of our friends may be devout believers in a Western religion, they also go to the lake to worship on this special day and likely don’t see a distinction between the two. There is a fluidity between these belief systems.

Religious syncretism is no surprise; it is seen worldwide, across time and space. While the Spanish conquest was violent and damaging to indigenous religions and peoples, Spanish padres in the North American Southwest during the seventeenth and eighteenth centuries, far from religious oversight in Mexico City, were at times flexible in their conversion practices of local indigenous peoples. Priests were good at learning traditional belief systems and languages in the highlands to encourage local Native people to relate to them. There are notable examples of Catholic churches being built on top of sacred kivas (Native religious and ceremonial underground structures) as a way for padres to mediate reception of their newly introduced ideas while also attempting to overpower indigenous peoples and religion, but there are also examples, such as at the sites of Abo and Quarai in the Salinas Pueblos, of padres allowing the construction of kivas immediately adjacent to churches.

I’m certain many of us know about other examples of religious syncretism from our own experiences with other groups, or perhaps from our own lives. I suspect many of us don’t live strictly in one world or one dimension, as we all have rich histories in our lives and experiences. Many communities that live with the heritage of colonialism likely have parallels to what I’ve described above. In Tucson, Arizona, where Jill and I live, we will be celebrating Easter weekend in part by going to traditional dances performed by local Yaqui tribal members. Yaqui tribal members, like many tribes in the US Southwest, connect their native traditions with those introduced by the Spanish. We will watch the dancing surrounded by the blooming Sonoran desert on one of the most important weeks in the Christian calendar.

An earlier version of this essay was recently published in Glyphs, the newsletter of the Arizona Archaeological and Historical Society.

John G. Douglass is the director of research and standards at Statistical Research, Inc. is also a visiting scholar at the University of Arizona School of Anthropology, and an officer in the non-profit organization Xela AID Partnerships in Self Reliance. He has undertaken archaeological research in California, the American Southwest and Midwest, Honduras, and Belize over the past thirty years. Over the past decade and a half, he has focused his research interests on colonial/indigenous interaction in the American Southwest and California from both archaeological and ethnohistoric perspectives. He is coeditor of New Mexico and the Pimería Alta: The Colonial Period in the American Southwest, Ancient Households of the Americas: Conceptualizing What Households Do, and Forging Communities in Colonial Alta California and author of Hinterland Households: Rural Agrarian Household Diversity in Northwest Honduras