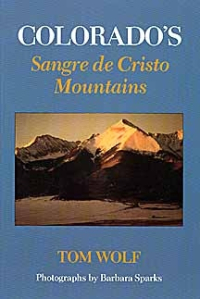 "When two artists excellent in their fields work together—Tom Wolf in writing and Barbara Sparks in photography—the sum is much greater than that of the simple addition of two parts. The result is a spectacular book that belongs not only in every Coloradan's library, but in that of anyone who loves the West and the mountains."
—Ann H. Zwinger
"Tom Wolf's book has more twists and turns than a patch of krummholz. By turns it is insightful, provocative, outrageous, and as crusty as spring snow. It lends a voice to a mountain range that has long deserved one."
—William de Buys, author of Enchantment and Exploitation

The remote Sangre de Cristo Mountains nurture the richest ecological and cultural diversity from Montana to New Mexico. Colorado's Sangre de Cristo Mountains draws on a wealth of scientific findings to show that the battered, beautiful Sangres need us as much as we need them. Focusing on forest ecology, environmental writer Tom Wolf shows how fire, insects, disease, humans, and other disturbances have formed the magnificent diverse forests we know today. The result, says Wolf, is a volatile, chaotic forest landscape that is neither entirely natural nor human-made. And to an extent even greater than we might wish, he argues, the Sangres are our artifact—and our responsibility.

In considering alternatives to nonmanagement, Wolf examines the environmental history of the Sangres' large private lands, including the Forbes and Taylor ranches, the sites of promising experiments in creating and maintaining wildlife habitat. Using the tools of island biogeography, geographic information systems, and sustainable economics, the author proposes downsizing the federal resource-management presence in ways that would nurture local ties between cultural and biological diversity and return the wolf to the region.

A solid work of science and history, Colorado's Sangre de Cristo Mountains will engage readers who want to break gridlock over economic and ecological issues, as well as those interested in the past and future of Colorado's high country.