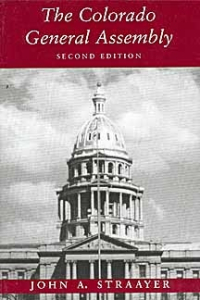 The Legislature is the dominant branch of government in Colorado. Yet until now, there has been no single study that so richly portrays this powerful institution and the nature of its membership.

The Colorado General Assembly is based on years of author John Straayer's first-hand observations, his review of original documents and secondary sources, and hundred of conversations with lawmakers, lobbyists, members of the legislative staff, executive branch personnel, and journalists.

In this lively, informative book, Straayer describes the formal structure of the Legislature, as well as the all-important process by which bills become or do not become law, and how the power center within the institution can move or kill legislative initiatives. He also examines the clout of the lobby corps, which outnumbers the elected lawmakers five to one; the way the Legislature dominates the budget process; and the manner by which divisions between the two parties, the two houses, and the legislative and executive branches impact the conduct of the public's business under Colorado's gold dome.

The Colorado General Assembly fills a major gap in our knowledge of state government. It will appeal to students and practitioners of politics as well as to those with general interest in civic life.

John Straayer is professor and past chairman of the political science department at Colorado State University. Since 1974, Professor Straayer has directed CSU's Legislative Internship Program. He is the author of numerous publications including The Study and Teaching of Political Science, The Politics of Neglect: The Environmental Crisis, and American, State and Local Government and Politics.