The Rockefeller Plan at the Colorado Fuel and Iron Company, 1914-1942 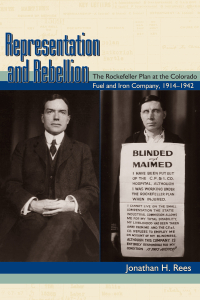 "Rees makes effective use of new sources to give a more nuanced understanding of the operation of one of the nation's more progressive company unions. He makes a strong case, in his conclusion, for the argument that, whatever the limitations of company employee plans, they provide workers with more protection than no union, and they often plant the seeds for the emergence of truly independent unions."
—Elizabeth Fones-Wolf, Business History Review

"Throughout his narrative, Rees sensitively reads and analyzes his evidence, presenting a story of company-sanctioned collective bargaining that is rather more complicated than one might expect . . . there is much to appreciate in this smart, focused book."
—Jason Scott Smith, University of New Mexico, New Mexico Historical Review

In response to the tragedy of the Ludlow Massacre, John D. Rockefeller, Jr. introduced one of the nation's first employee representation plans (ERPs) to the Colorado Fuel and Iron Company in 1915. With the advice of William Mackenzie King, who would go on to become prime minister of Canada, the plan—which came to be known as the Rockefeller Plan—was in use until 1942 and became the model for ERPs all over the world.

Addressing key issues of how this early twentieth-century experiment fared from 1915 to 1942, Rees argues that the Rockefeller Plan was a limited but temporarily effective alternative to independent unionism in the wake of the Ludlow Massacre. The book will appeal to business and labor historians, political scientists, and sociologists, as well as those studying labor and industrial relations.

Jonathan Rees is an associate professor of history at Colorado State University-Pueblo specializing in American labor history, American business history, and the history of technology.