The Life and Times of Richard Castro 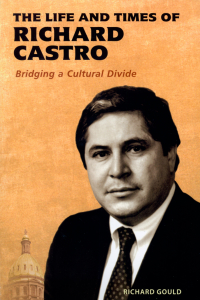 Winner of the 2007 Colorado Book Award for History

"This is a well-written, overall exemplary biography. It will surely find a home among lay readers, and Gould is to be complimented for his important contribution to these and related fields. It is civil rights history at its finest."
—Roberto R. Calderon, Western Historical Quarterly

Hispanic leader Richard Castro wasn't above a good street fight. Denver police beat him bloody during a 1960s confrontation, and political rivals later shot him and bombed his home. But he emerged from the early struggles of Denver's Hispanic movement—El Movimiento—to become one of Colorado's most important political figures. During his ten years as a state representative and, later, as a key ally of Denver mayor Federico Peña, Castro personified the Hispanic community's newfound political power.

The Life and Times of Richard Castro traces Castro's path from the streets of west Denver to the chambers of the state capitol. It also traces a community's coming of age—an event that transformed politics and society in Colorado and throughout the West.