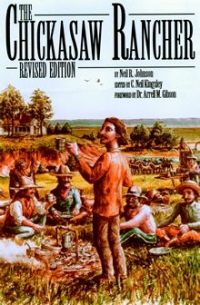 First published in 1960, Neil R. Johnson's The Chickasaw Rancher, Revised Edition tells the story of Montford T. Johnson and the first white settlement of Oklahoma. Abandoned by his father after his mother's death and then left on his own following his grandmother's passing in 1868, Johnson became the owner of a piece of land in the northern part of the Chickasaw Nation in what is now Oklahoma.

The Chickasaw Rancher follows Montford T. Johnson's family and friends for the next 32 years. Neil R. Johnson describes the work, the ranch parties, cattle rustling, gun fights, tornadoes, the run of 1889, the hard deaths of many along the way, and the rise, fall, and revival of the Chickasaw Nation.

This revised edition of The Chickasaw Rancher, edited by C. Neil Kingsley, Neil R. Johnson's grandson, is the perfect addition to any reader's collection of the history of the American West.

Neil R. Johnson was born on one of his father's ranches in July of 1893. After World War II, he returned to Oklahoma to oversee his father's properties with his own family. He stayed active with the family business until his death in 1970.

Arrell M. Gibson was George Lynn Cross Research Professor of History at the University of Oklahoma.