by Jacques Galinier, translated by Howard Scott and Phyllis Aronoff 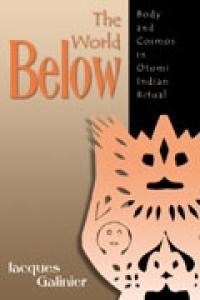 "[The World Below] can be used as a basic reference book on Sierra Otomí ritual processes. However, wrapped around this descriptive focus is a complex interpretive language aimed at capturing a complex repressed dialogic discourse on sexuality in the relation between body and cosmos."
—Latin American Studies

"Galinier offers a compelling portrayal of the complex, dynamic relationships between ritual and thought in Otomí life, both today and in the past. Combining rich description and elegant analysis, he guides the reader through the intricacies of Otomí history and culture, following the same paths that led him to the underlying structures and deep meanings that organize their actions and orient them to their cosmos. Along the way, he explores a wide range of issues fundamental to the Western intellectual tradition and demonstrates the interdependence of broad theoretical perspectives and specific ethnographic inquiries. The World Below exemplifies ethnographic practice at its best, providing an extraordinary account of the Otomí, a significant contribution to contemporary social theory, and a model for anthropological research and writing in the future."
—William L. Merrill, Curator of Anthropology, Smithsonian Institution

"Through his exploration of an 'indigenous metapsychology' at work through rituals, paper ídolos, and ideas, Galinier relates the symbolism of natives and Catholics (or I should say Catholic natives and native Catholics) to the real human problems of suffering and healing."
—Davíd Carrasco, Harvard University

In The World Below, Jacques Galinier surveys both traditional Otomí cosmology and colonial and contemporary Catholic rituals to illustrate the complexity of continuity and change in Mesoamerican religious ideology and practice. Galinier explores the problems of historical and family memory, models of space and time, the role of the human habitation in cosmology, shamanism and healing, and much more. He elucidates the way these realities are represented in a series of arresting oppositions—both Otomí oppositions and the duality of indigenous and Catholic ritual life—between the upper and lower human body.

Drawing upon both Freud and theories of the carnivalesque, Galinier argues that the "world below" (the lower half of the body) provides the foundation for an indigenous metapsychology that is at once very close to and very far away from the Freudian conceptual apparatus.

Howard Scott is one of the award-winning translators of Gilles Havard's The Great Peace of Montreal (McGill-Queen's University Press).

Phyllis Aronoff is one of the award-winning translators of Gilles Havard's The Great Peace of Montreal (McGill-Queen's University Press).