City of Life, City of Death 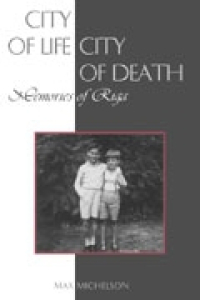 Buy Now
Copyright Clearance Center
Member Institution Access
"With each memoir by a survivor, Riga's tragic fate becomes better known. Thus Max Michelson's book, filled with poignant and moving episodes, deserves to be read by anyone wishing to learn more about the life and death of a Jewish community which included the great historian Shimon Dubnov. But it is also a story of courage and rebirth of a young man who wants to find meaning in his survival."

City of Life, City of Death: Memories of Riga is Max Michelson's stirring and haunting personal account of the Soviet and German occupations of Latvia and of the Holocaust.

Michelson had a serene boyhood in an upper middle-class Jewish family in Riga, Latvia—at least until 1940, when the fifteen-year old Michelson witnessed the annexation of Latvia by the Soviet Union. Private properties were nationalized, and Stalin's terror spread to Soviet Latvia. Soon after, Michelson's family was torn apart by the 1941 Nazi invasion of the Soviet Union. He quickly lost his entire family, while witnessing the unspeakable brutalities of war and genocide.

Michelson's memoir is an ode to his lost family; it is the speech of their muted voices and a thank you for their love. Although badly scarred by his experiences, like many other survivors he was able to rebuild his life and gain a new sense of what it means to be alive.

His experiences will be of interest to scholars of both the Holocaust and Eastern European history, as well as the general reader.

Max Michelson, a retired engineer, is married and lives in Framingham, Massachusetts. With his wife Julia, he has raised two sons, and Michelson regards his three grandchildren as the best thing that has ever happened to him.