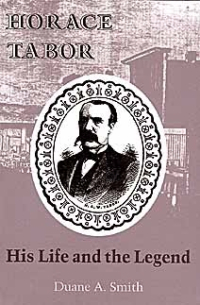 Oro City, December 27, 1876. Is a shrewd businessman and not liable to lose money, has a good chance to make money as he has no competition. Estimated worth say $15,000.

This R.G. Dun report fairly and accurately described the pre-Leadville and bonanza Horace Tabor. An 1858er who had spent nearly two decades following the will-o-the-wisp Colorado mining frontier, Tabor was then living and working in out-of-the-way Oro City, near where Leadville would be one day.

Soon thereafter came the Little Pittsburg silver strike, and Tabor's fortune took flight. Very quickly, Colorado—and the rest of the nation—was hearing about Horace Tabor. "Denver's lucky star was on high when Governor Tabor decided to spend his fortune here," praised the Denver Tribune (September 7, 1881). The Leadville Daily Herald (July 8, 1882) also understood his contribution: "Colorado has produced fortunes for many men, but no man who has met with success has so freely made investments in this state, as has Governor Tabor."

The events that followed that amazing silver discovery on Fryer Hill, May 1878 unfolded like a classic Greek tragedy. Tabor weathered them all, and his name has resounded through the succeeding decades. No other Coloradan of his generation is so well remembered, nor does anyone else so typify the tempo of this legendary mining era. While the others—Henry Teller, David Moffat, Jerome Chaffee, Edward Wolcott—have faded in memory, Tabor is still alive, thanks in no small measure to that epoch-capturing opera, The Ballad of Baby Doe.