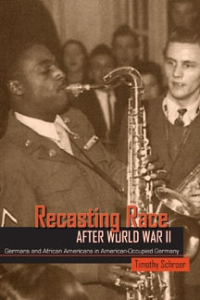 "Timothy L. Schroer's deeply engaging and well-researched book presents a thorough investigation of the relationship of white German women and African Americans in American-occupied Germany. The book impresses with the detailed account of African Americans in the American army, which constantly moves beyond simplistic assumptions of racist discrimination, but always illustrates how precisely different attitudes regarding race were negotiated in light of the public eye in the United States and Germany. All in all, this is a highly readable, instructive, and recommendable text."
—Barbara Mennel, German Studies Review

"Schroer demonstrates in utterly convincing fashion that certain shifts in military policy simply cannot be understood without careful attention to the history of gender and sexuality, and he provides important insights into a strangely neglected aspect of post-war American military policy."
—Annette F. Timm, The Journal of Military History

"Schroer's fine book is not only a welcome addition to the historiography of the occupation period and our understanding of intercultural race relations, it should also encourage further exploration into how the experiences of African American soldiers in occupied Germany may have influenced America's long march toward racial justice in the six decades after the occupation’s end."
—H-Net Reviews

Historian Timothy L. Schroer's Recasting Race after World War II explores the renegotiation of race by Germans and African American GIs in post-World War II Germany. Schroer dissects the ways in which notions of blackness and whiteness became especially problematic in interactions between Germans and American soldiers serving as part of the victorious occupying army at the end of the war.

The segregation of U.S. Army forces fed a growing debate in America about whether a Jim Crow army could truly be a democratizing force in postwar Germany. Schroer follows the evolution of that debate and examines the ways in which postwar conditions necessitated reexamination of race relations. He reveals how anxiety about interracial relationships between African American men and German women united white American soldiers and the German populace. He also traces the importation and influence of African American jazz music in Germany, illuminating the subtle ways in which occupied Germany represented a crucible in which to recast the meaning of race in a post-Holocaust world.

Recasting Race after World War II will appeal to historians and scholars of American, African American, and German studies.

Timothy L. Schroer is an assistant professor in the History Department of the University of West Georgia.