Spain and the Plains 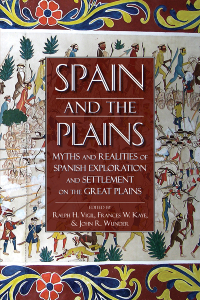 The myths of settlement of the Great Plains usually conjure up images of Anglo-American pioneers moving into a sea of grass, opposed by Native peoples. Such myths leave out the considerable influence of Spain. Spain and the Plains corrects this error, revealing the Plains as a northern frontier of New Spain, a frontier antedating the northern European presence in North America, and a frontier where Spanish and Native peoples met, clashed, and blended.

Spain and the Plains introduces and documents Spanish exploration of and migration to the Plains, examines the myths that shaped Spanish exploration and the pragmatic realities of exploration and settlement, and documents racism and misrepresentation that Hispanic groups encountered in the nineteenth and twentieth centuries. Contributors show how early explorers, shaped by the intellectual context of the Renaissance, sought mythical locales: the fountain of youth, the straits of Anian, and the city of Quivira. They describe how exploration shifted to emphasize military and economic gains in the eighteenth and nineteenth centuries. Essays portray the diaspora of Spanish settlers and reconstruct daily life in their settlements on the Plains.

This unique collection paints a clear picture of a crucial but often misrepresented and neglected era in American and Spanish history.

Ralph H. Vigil is a professor emeritus of history and ethnic studies and is affiliated with the Center for Great Plains Studies at the University of Nebraska-Lincoln.

John R. Wunder is professor of history at the University of Nebraska-Lincoln and former Director of the Center for Great Plains Studies.

John R. Wunder is professor of history at the University of Nebraska-Lincoln and former Director of the Center for Great Plains Studies.