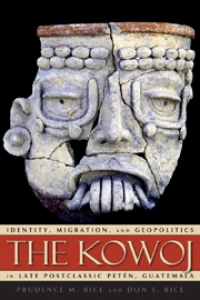 "[S]ubstantially enhances our understanding of Petén, its peoples, and its history. This book should attract a broad readership for its nuanced examination of material reflections of identity in a complex and shifting sociopolitical landscape."
—John S. Henderson, American Anthropologist

Neighbors of the better-known Itza in the central Petén lakes region of Guatemala, the Kowoj Maya have been studied for little more than a decade. The Kowoj: Identity, Migration, and Geopolitics in Late Postclassic Petén, Guatemala summarizes the results of recent research into this ethno-political group conducted by Prudence Rice, Don Rice, and their colleagues.

Chapters in The Kowoj address the question "Who are the Kowoj?" from varied viewpoints: archaeological, archival, linguistic, ethnographic, and bioarchaeological. Using data drawn primarily from the peninsular site of Zacpetén, the authors illuminate Kowoj history, ritual components of their self-expressed identity, and their archaeological identification. These data support the Kowoj claim of migration from Mayapán in Yucatán, where they were probably affiliated with the Xiw, in opposition to the Itza. These enmities extended into Petén, culminating in civil warfare by the time of final Spanish conquest in 1697.

The first volume to consider Postclassic Petén from broadly integrative anthropological, archaeological, and historical perspectives, The Kowoj is an important addition to the literature on late Maya culture and history in the southern lowlands. It will be of particular interest to archaeologists, historians, ethnohistorians, art historians, and epigraphers.

Prudence M. Rice is Distinguished Professor Emerita in the Department of Anthropology at Southern Illinois University, Carbondale. She has authored, edited, or coedited thirteen books.

Don S. Rice is Professor Emeritus in the Department of Anthropology at Southern Illinois University, Carbondale; a past Director of its Center for Archaeological Investigations research center; and a former Provost and Vice Chancellor of the university.