Factionalism and the Limits of Identity Politics in Yucatan, Mexico 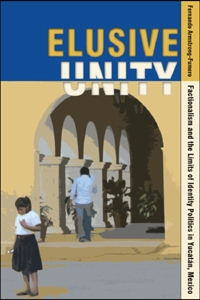 "Armstrong-Fumero has done research in one of the areas most frequented by anthropologists yet he has come up with methodological and theoretical insights that go beyond the large body of publications . . . not only a solid contribution to the ethnographic literature, but to indigenous movements in the Western Hemisphere."
—June Nash, City University of New York

"Of a spate of books that have come out in recent years on the intricacies of Maya ethnicity in the Yucata­n Peninsula, this work by Smith College anthropologist Armstrong-Fumero, based upon a decade of study, is the most cogent and insightful . . . . A highly readable, very contemporary, important work. Summing up: Essential."
—CHOICE

"Throughout the book, Armstrong-Fumero demonstrates a sensitivity to the diversity of local experiences and perspectives that can only come through many years of dedicated fieldwork. He also provides insightful analysis of linguistic practices, the profound meanings associated with those practices, and the rhetorical strategies and tropes utilized in both legal and quotidian contexts . . . . the book is very readable and provides an excellent case study of sociocultural continuity and change over the course of a century."
—Political and Legal Anthropology Review Online

"Armstrong-Fumero’s ethnography is an important, welcome addition to the work of other anthropologists and ethnographers such as Quetzil Castaneda, Juan Castillo Cocom, Shannan Mattiace, and Wolfgang Gabbert, whose groundbreaking work on Yucatan and Yucatec Maya communities challenges and complicates how academics think about indigenous actors and construct their fields of study. While Elusive Unity may be seen as aimed at specialists, its engagement with indigenous terms of identity and its grounding in Yucatec Maya material realities cuts across disciplines and should prove valuable to a wide range of readers concerned with indigeneity, identity politics, and community formation."
—Journal of Latin American and Caribbean Anthropology

"Why has identity politics been tepidly received by the Yucatecan Maya, while it has thrived among the Maya in neighboring Chiapas and Guatemala? Armstrong-Fumero’s fine first monograph examines its limited appeal in Yucatan’s oft-studied oriente (eastern reaches) using original archival research, insights culled from a decade of ethnographic field work and an admirable command of the abundant ethnography of Yucatan. . . . Armstrong-Fumero has given Mayanists significant new ways of understanding the slippery subject of modern Maya identity, and scholars of plurinationalism quite a lot to think about."

—The Journal of Peasant Studies

The rural inhabitants of this region have had some of their most important dealings with their nation's government as self-identified "peasants" and "Maya." Using ethnography, oral history, and archival research, Armstrong-Fumero shows how the same body of narrative tropes has defined the local experience of twentieth-century agrarianism and twenty-first-century multiculturalism.

Through these recycled narratives, contemporary multicultural politics have also inherited some ambiguities that were built into its agrarian predecessor. Specifically, local experiences of peasant and indigenous politics are shaped by tensions between the vernacular language of identity and the intense factionalism that often defines the social organization of rural communities. This significant contribution will be of interest to historians, anthropologists, and political scientists studying Latin America and the Maya.

Fernando Armstrong-Fumero is an associate professor of anthropology at Smith College. He has conducted research in Maya-speaking communities in Yucatan, Mexico, since 1997.