The Rockefellers and the Legacy of Ludlow 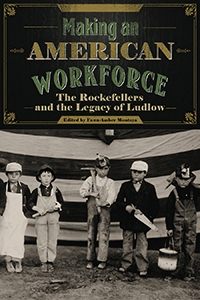 Buy Now
Copyright Clearance Center
Member Institution Access
"Making an American Workforce is a useful addition to the historiography on CF&I's ERP, and raises new questions about the program's effectiveness in 'making' workers."

"[T]hese enlightening essays suggest that after the passage of a century we are not finished learning the lessons of the Ludlow massacre.​"​

—The Journal of American History

"The authors’ divergent assessments of the Rockefeller Plan will spark lively discussions among historians of western class, race, gender, and labor. Making an American Workforce contributes to histories of western labor and industrial relations and the rise and limits of welfare capitalism."

Taking an interdisciplinary approach to the policies of the early years of the Colorado Fuel and Iron Company, Making an American Workforce explores John D. Rockefeller, Jr.'s welfare capitalist programs and their effects on the company's diverse workforce.

Focusing on the workers themselves—men, women, and children representative of a variety of immigrant and ethnic groups—contributors trace the emergence of the Employee Representation Plan, the work of the company's Sociology Department, and CF&I's interactions with the YMCA in the early twentieth century. They examine CF&I's early commitment to Americanize its immigrant employees and shape worker behavior, the development of policies that constructed the workforce it envisioned while simultaneously laying the groundwork for the strike that eventually led to the Ludlow Massacre, and the impact of the massacre on the employees, the company, and beyond.

Fawn-Amber Montoya is associate professor of history and coordinator of the Chicano Studies Program at Colorado State University–Pueblo.