Remembering the Dead in the Ancient Near East 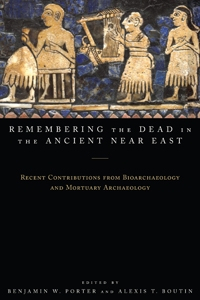 "This important and innovative volume presents an unusual confluence of bioarchaeological, mortuary, and historical data analyses in order to provide an integrated approach to the study of the dead in the ancient Near East. Included are creative reconsiderations of the nature of burial, both for humans and nonhumans, the recognition of ethnicity in ancient Mesopotamia and Egypt, and genetic relations in Early Bronze Age Jordan. Other new ideas and approaches include consideration of disabled persons in antiquity (and in the present day) and a reinterpretation of 'grave robbing' in ancient Egypt. The volume stands apart in its insistent focus on the nonelite, in contrast to the attention usually devoted to royal and elite burials in places like Egypt and Mesopotamia. As a signpost toward the directions Near Eastern bioarchaeology is taking, Remembering the Dead in the Ancient Near East will be extremely valuable for all interested in the archaeological study of the dead."
—Glenn Schwartz, The Johns Hopkins University

"This well-timed volume brings much-needed theoretical and methodological rigor to ancient Near Eastern mortuary archaeology. Remembering the Dead in the Ancient Near East demonstrates the power of exploring the material remains of mortuary rituals and uses an interdisciplinary approach to present ancient mortuary practices as ongoing commemorative acts, rather than material tableaus frozen in time."
—Megan A. Perry, East Carolina University

"An accessible, informative, and thought-provoking set of papers in which bioarchaeological data dovetails variously into site stratigraphy, artefact typology, visual culture, and textual history. The book achieves a genuinely holistic perspective. . . . Remembering the Dead succeeds in striking a good balance between showing what bioarchaeology can do for the more ‘traditional’ methods of mortuary analyses, and what such methods can do for bioarchaeology. It is therefore highly recommended, not exclusively for funerary specialists, but for anyone invested in achieving greater interdisciplinary readings of the ancient past."
—Bryn Mawr Classical Review

"The present volume highlights interdisciplinary approaches that bring various methods together under the aegis of anthropology, providing a window on new integrative study that holds great promise for our increased understanding of death and the dead in the ancient Near East."

"Porter and Boutin’s interdisciplinary volume is a fascinating exhibition of new approaches to funerary archaeology of the ancient Near East. In addition to the presentation of innovative theoretical frameworks and research methods, many of the essays focus on the lives of non-elite and disenfranchised groups, whose stories are traditionally underrepresented in the scholarly literature. . . . the volume sets a new standard for bioarchaeological studies of the ancient Near East, and it is hoped that the precedent set here will prompt future research of a similar sophisticated and comprehensive fashion."

"The book should be part of all libraries that cover the ancient Near East. This has an interesting mix of scholars. . . . that creates a very rich and stimulating paper full of food for thought."
—Bibliotheca Orientalis

Remembering the Dead in the Ancient Near East is among the first comprehensive treatments to present the diverse ways in which ancient Near Eastern civilizations memorialized and honored their dead, using mortuary rituals, human skeletal remains, and embodied identities as a window into the memory work of past societies.

In six case studies teams of researchers with different skill sets—osteological analysis, faunal analysis, culture history and the analysis of written texts, and artifact analysis—integrate mortuary analysis with bioarchaeological techniques. Drawing upon different kinds of data, including human remains, ceramics, jewelry, spatial analysis, and faunal remains found in burial sites from across the region's societies, the authors paint a robust and complex picture of death in the ancient Near East.

Demonstrating the still under-explored potential of bioarchaeological analysis in ancient societies, Remembering the Dead in the Ancient Near East serves as a model for using multiple lines of evidence to reconstruct commemoration practices. It will be of great interest to students and scholars of ancient Near Eastern and Egyptian societies, the archaeology of death and burial, bioarchaeology, and human skeletal biology.

Alexis T. Boutin is associate professor of anthropology and coordinator of the Cultural Resources Management MA program at Sonoma State University. She is co-director of the Dilmun Bioarchaeology Project and recently completed work on the Tell en-Nasbeh Bioarchaeology Project. She is a co-editor of Breathing New Life into the Evidence of Death: Contemporary Approaches to Bioarchaeology (School for Advanced Research Press, 2012).