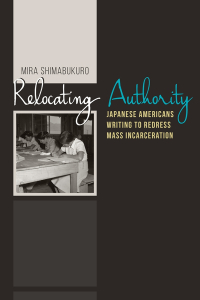 "Mira Shimabukuro has awarded us a deeply inspiring study of how Japanese Americans used writing to resist and redress the mass incarceration they endured during World War II. Innovative in its methodology, dynamic in its interdisciplinary framework, and meticulous in its analysis, Relocating Authority engages writing to redress as incarceration camp literacy practice through the lens of rhetorical attendance, thus modeling a new way of seeing/listening for rhetoric that will greatly inform scholars and students from a variety of fields including rhetoric and writing studies and Asian American studies."

"This is original, cutting-edge work. Mira Shimabukuro sets a new standard in camp studies with her finely crafted writing and her framing of ​'writing-to-redress.​' Her recovery of this wide range of writing that challenges authority, much of it by women, is itself a significant act of redress that once again changes the way we look at the Japanese American response to incarceration​."​

"[A] rewarding and informative read that takes the reader to some unexpected places.​"

"[Shimabukuro] succeeds admirably in rendering her theorizing user-friendly for a general readership by a combination of sparkling prose and irradiating examples. . . . ​[Shimabukuro​] pays forward a family an​​d community legacy of Nikkei resistance activity. In so doing, she also has gained a place for herself in the pantheon of Japanese American resistance historiography.​"​

“[C]hallenges us to resee a moment and to look more deeply at what we find in relation to all the other artifacts we have. . . [Shimabukuro’s] book is both a text about writing to redress and writing to redress in action.”
—College Composition and Communication

Relocating Authority examines the ways Japanese Americans have continually used writing to respond to the circumstances of their community’s mass imprisonment during World War II. Using both Nikkei cultural frameworks and community-specific history for methodological inspiration and guidance, Mira Shimabukuro shows how writing was used privately and publicly to individually survive and collectively resist the conditions of incarceration.

Examining a wide range of diverse texts and literacy practices such as diary entries, note-taking, manifestos, and multiple drafts of single documents, Relocating Authority draws upon community archives, visual histories, and Asian American history and theory to reveal the ways writing has served as a critical tool for incarcerees and their descendants. Incarcerees not only used writing to redress the “internment” in the moment but also created pieces of text that enabled and inspired further redress long after the camps had closed.

Relocating Authority highlights literacy’s enduring potential to participate in social change and assist an imprisoned people in relocating authority away from their captors and back to their community and themselves. It will be of great interest to students and scholars of ethnic and Asian American rhetorics, American studies, and anyone interested in the relationship between literacy and social justice.

Mira Shimabukuro is lecturer in the School of Interdisciplinary Arts and Sciences at University of Washington, Bothell, where she teaches courses on the politics of language, literacy, and writing. Her creative work has been published in such journals as CALYX, Bamboo Ridge Quarterly, and Raven Chronicles, while her scholarship can be found in College English and Representations: Doing Asian American Rhetoric.