edited by Rachel A. Horowitz and Grant S. McCall 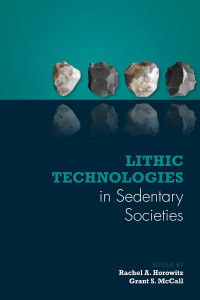 “The editors have developed a significant new topic that will have broad implications to archaeologists across the world.”
—Peter Bleed, emeritus professor, University of Nebraska–Lincoln

"A substantial contribution to the study of lithic technology, presenting case studies of stone artifacts in sedentary societies in South Asia, the Near East, Mesoamerica, and North America. . . . the volume demonstrates the important information that lithic artifacts can provide about anthropological questions, such as economic activities, political organization, resource and production management, and the relationship between societal and technological change."
—Latin American Antiquity

"Horowitz and McCall and their colleagues do an excellent job of showing that the stone tools found on sites belonging to sedentary food producers or those of urban societies do matter, not least by illustrating the variety of ways in which they can be productively investigated. . . . of interest and value not only to lithic specialists, but also to anthropological archaeologists as a whole."
—Journal of the Royal Anthropological Institute

Lithic analysis focused on sedentary societies, especially in places like Mesoamerica, has previously been neglected mostly because of the high frequency of informal tools, but such bias limits the ways in which both lithic production and economic organization are investigated. Bringing the importance of studying such technologies to the fore and emphasizing the vital anthropological questions that lithics can answer, Lithic Technologies in Sedentary Societies is a valuable resource for scholars and students of lithic technology and sedentary, complex societies.

Rachel A. Horowitz is assistant professor in the Department of Anthropology at Washington State University. Her research interests include lithic technology, technological organization, economic organization, and the Maya. Her work has been published in several journals and edited volumes including American Antiquity, Paleoanthropology, Journal of Field Archaeology, and Journal of Archaeological Sciences: Reports.

Grant S. McCall is executive director of the Center for Human-Environmental Research and associate professor in the Department of Anthropology at Tulane University. His research interests include stone tool technology, human evolution, rock art research, hunter-gatherer ethnology, African prehistory, and political philosophy. He is also the editor of Lithic Technology.