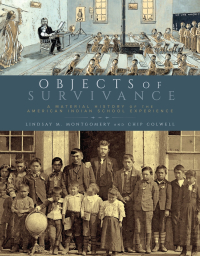 Copublished with the Denver Museum of Nature & Science

"Praise is due to the authors for this publication, and to the institutions still archiving these treasures in 2019."
—CHOICE

"This book is the dream of many an archivist who falls in love with a collection while processing it. It creates the opportunity to share the important details of the vast contents of a collection that might otherwise be overlooked."
—The Denver Westerners Roundup

Between 1893 and 1903, Jesse H. Bratley worked in Indian schools across five reservations in the American West. As a teacher Bratley was charged with forcibly assimilating Native Americans through education. Although tasked with eradicating their culture, Bratley became entranced by it—collecting artifacts and taking glass plate photographs to document the Native America he encountered. Today, the Denver Museum of Nature & Science’s Jesse H. Bratley Collection consists of nearly 500 photographs and 1,000 pottery and basketry pieces, beadwork, weapons, toys, musical instruments, and other objects traced to the S’Klallam, Lakota Sioux, Cheyenne, Arapaho, Havasupai, Hopi, and Seminole peoples.

This visual and material archive serves as a lens through which to view a key moment in US history—when Native Americans were sequestered onto reservation lands, forced into unfamiliar labor economies, and attacked for their religious practices. Education, the government hoped, would be the final tool to permanently transform Indigenous bodies through moral instruction in Western dress, foodways, and living habits. Yet Lindsay Montgomery and Chip Colwell posit that Bratley’s collection constitutes “objects of survivance”—things and images that testify not to destruction and loss but to resistance and survival. Interwoven with documents and interviews, Objects of Survivance illuminates how the US government sought to control Native Americans and how Indigenous peoples endured in the face of such oppression.

Rejecting the narrative that such objects preserve dying Native cultures, Objects of Survivance reframes the Bratley Collection, showing how tribal members have reconnected to these items, embracing them as part of their past and reclaiming them as part of their contemporary identities. This unique visual and material record of the early American Indian school experience and story of tribal perseverance will be of value to anyone interested in US history, Native American studies, and social justice.

Lindsay M. Montgomery is assistant professor of anthropology at the University of Arizona. Her research has been supported by the Radcliffe Institute, National Science Foundation, National Geographic–Waitt Foundation, and the Denver Museum of Nature & Science. She has published several scholarly book chapters and articles in the International Journal of Heritage Studies, Journal of Social Archaeology, Advances in Archaeological Practice, and Museum Anthropology.

Chip Colwell is the founding editor-in-chief of SAPIENS and former senior curator of anthropology at the Denver Museum of Nature & Science. He has written and edited twelve books, and his essays have appeared widely, including in The New York Times, The Guardian, and The Atlantic. His TED Talk about the return of sacred objects from museums to Native Americans has been viewed more than 1 million times. He is the recipient of two National Council on Public History Book Awards and the Gordon R. Willey Prize of the American Anthropological Association.