The Next Time We Strike 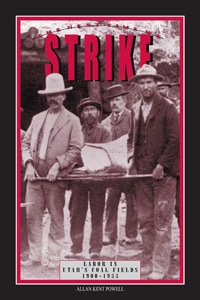 May 1, 1900 turned into a day of horror at Scofield, Utah, where a mine explosion killed two hundred men. In the traumatic days that followed, the surviving miners began to understand that they, too, might be called to make this ultimate sacrifice for mine owners. The time for unionization in Utah was at hand.

A sensitive and in-depth portrayal of the efforts to unionize Utah's coal miners, The Next Time We Strike explores the ethnic tensions and nativistic sentiments that hampered unionization efforts even in the face of mine explosions and economic exploitation. Powell utilizes oral interviews, coal company reports, newspapers, letters, and union records to tell the story from the miners' perspective.

Allan Kent Powell is historian and public history coordinator with the Utah State Historical Society. He is the author of six books and teaches at Westminster College in Salt Lake City.