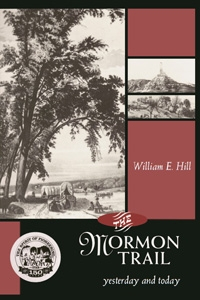 Back in print, this essential reference for readers interested in the Mormon Trail is part history, part resource book, part guide and photographic essay. Driven from their home in Nauvoo, Illinois, Mormons led by Brigham Young began in 1846 to journey west to an expected haven in the Great Salt Lake Valley. The first party arrived there in July 1847. Thousands of members and converts later followed the Mormon Trail, which for much of its way traced the route of the Oregon Trail, although it generally stayed across the Platte River from the more-traveled way. It was thus, until the railroad's arrival in 1869, one of the West's most important and heavily used roads.

Although the Mormons' experience was in most ways similar to that of other emigrants, the religious motivations, tight organization, and family groups of the Mormons gave their migration a distinct character. William E. Hill introduces the Mormons, their eventful early history, and the characteristics of the migration west. His book also includes a chronology of trail-related events, excerpts from diaries and guidebooks, songs, historical maps, over 200 then-and-now illustrations, descriptions of major museums and displays on the trail, and recommendations for further reading.

William E. Hill is the author of numerous books on western trails and has devoted many years and traveled thousands of miles collecting material for his guides. He is a member of the Lewis and Clark Trail Heritage Foundation, the Oregon-California Trails Association, the Santa Fe Trail Association, Western Writers of America and various historical associations.