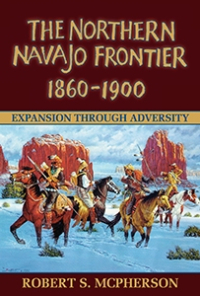 The Navajo nation is one of the most frequently researched groups of Indians in North America. Anthropologists, sociologists, historians, and others have taken turns explaining their views of Navajo history and culture. A recurrent theme throughout is that the U.S. government defeated the Navajos so soundly during the early 1860s that after their return from incarceration at Bosque Redondo, they were a badly shattered and submissive people.

The next thirty years saw a marked demographic boom during which the Navajo population doubled. Historians disagree as to the extent of this growth, but the position taken by many historians is that because of this growth and the rapidly expanding herds of sheep, cattle, and horses, the government beneficently gave more territory to its suffering wards.

While this interpretation is partly accurate, it centers on the role of the government, the legislation that was passed, and the frustrations of the Indian agents who rotated frequently through the Navajo Agency in Fort Defiance, New Mexico, and ignores or severely limits one of the most important actors in this process of land acquisition—the Navajos themselves. Instead of being a downtrodden group of prisoners, defeated militarily in the 1860s and dependent on the U.S. government for protection and guidance in the 1870s and '80s, they were vigorously involved in defending and expanding the borders of their homelands. This was accomplished not through war and as a concerted effort, but by an aggressive defensive policy built on individual action that varied with changing circumstances. Many Navajos never made the Long Walk to Bosque Redondo. Instead they eluded capture in northern and western hinterlands and thereby pushed out their frontier.

This book focuses on the events and activities in one part of the Navajo borderlands—the northern frontier—where between 1860 and 1900 the Navajos were able to secure a large portion of land that is still part of the reservation. This expansion was achieved during a period when most Native Americans were losing their lands.