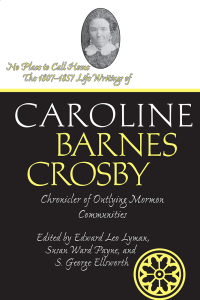 Caroline Crosby's life took a wandering course between her 1834 marriage to Jonathan Crosby and conversion to the infant Mormon Church and her departure for her final home, Utah, on New Year's Day, 1858. In the intervening years, she lived in many places but never long enough to set firm roots. Her adherence to a frontier religion on the move kept her moving, even after the church began to settle down in Utah. Despite the impermanence of her situation—perhaps even because of it—Caroline Crosby left a remarkably rich record of her life and travels, thereby telling us not only much about herself and her family but also about times and places of which her documentary record provides a virtually unparalleled view. A notable aspect of her memoirs and journals is what they convey of the character of their author, who, despite the many challenges of transience and poverty she faced, appears to have remained curious, dedicated, observant, and optimistic.

From Caroline's home in Canada, she and Jonathan Crosby first went to the headquarters of Joseph Smith's new church in Kirtland, Ohio. She recounts, in a memoir, the early struggles of his followers there. As the church moved west, the Crosbys did as well, but, as became characteristic, they did not move immediately with the main body to the center of the religion. For a while they settled in Indiana, finally reaching the new Mormon center of Nauvoo in 1842. Fleeing Nauvoo with the last of the Mormons in 1846, they spent two years in Iowa and set out for Utah in 1848, the account of which is the first of Caroline Crosby's vivid trail journals. The Crosbys were able to rest in Salt Lake City for less than two years before Brigham Young sent them on a church mission to the Society and Austral Islands in the South Pacific. She recorded, in detail, their overland travel to San Francisco and then by sea to French Polynesia and their service on the islands. In late 1852 the Crosbys returned to California, beginning what is probably the most historically significant time recorded in her writings, her diaries of life. First, in immediately post-Gold-Rush San Francisco and, second, in the new Mormon village of San Bernardino in southern California. There is no comparable record by a woman of 1850s life in these growing communities. The Crosbys responded in 1857 to Brigham Young's call for church members to gather in Utah and again abandoned a new home—the nicest one they had built and one of the finest houses in San Bernardino—again displaying their unquestioning loyalty to the Mormon church.

The Association for Mormon Letters, 2005

S. George Ellsworth was a professor of history at Utah State University.