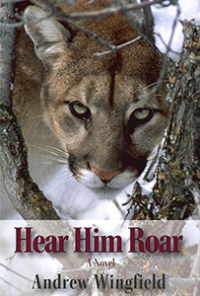 "Hear Him Roar introduces a gifted and terribly smart new writer from the West. If Andrew Wingfield keeps making novels this good, we've got a worthy successor to Wallace Stegner and a good nephew of Edward Abbey, Joan Didion, and James Houston."
—Alan Cheuse, NPR's All Things Considered

"I much admire what Andrew Wingfield has achieved in this fine first novel, the engaging voice, the mature vision. Charlie Sayers seems to have no answer to the riddle of his life—until the mystery of wild creatures touches him profoundly and guides him toward a new beginning. This is a story told with both art and wisdom."
—James D. Houston, author of Snow Mountain Passage

"Wingfield leads us to Sayers's nadir and beyond as we consider the fate of mountain lions stalking nouveau suburbs and the inevitable political and media fallout. I enjoyed Wingfield's humor, gentle satire, and steady compassion."
—O. Alan Weltzien, editor of The Literary Art and Activism of Rick Bass and coeditor of Coming into McPhee Country

A cougar attacks a jogger in the suburbs of a western city. Charlie Sayers, facing retirement as a wildlife biologist at a downsized state agency, is drawn into the search for the lion. He gets caught up in the conflict between wildlife habitat and an increasingly developed environment as, teetering between crisis and farce, he tries to piece together the puzzle of his own life.