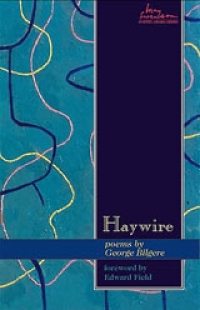 Volume 10 of the May Swenson Poetry Award Series, 2006

"Here, I felt, was an irresistible, not-so-easy, engaging humanness. Bilgere is a damn good poet. So good that when I found out who he was, and that he'd already gotten major awards—one chosen by Poet Laureate Billy Collins—I was dismayed that I hadn't been the one to discover him!"

"George Bilgere is a smooth-talking poet whose ease of language can lead us unawares into a complex terrain of the heart and spirit. Haywire is full of bittersweet poems that are balanced between humor and seriousness, between the sadness of loss and the joy of being alive to experience it. Whenever a parade of Bilgere poems goes by, I'll be there waving my little flag."
—Billy Collins, formerly U.S. Poet Laureate

"This poet, you knew from his very first lines, didn't fall for anything phony—his own language is irresistibly no-bullshit down to earth, even sassy.... Coming from one of the ethnic, industrial cities, his work has a gritty element. He recalls all the sorrows of a life—the drunken father, the parents' divorce, his mother's death, his unremitting horniness, his own divorce—nothing special, just what we all have to deal with one way or another. And yet he ends on an almost contented note. Haywire is remarkable for being an essentially happy book, though with an ironic eye cast on such happiness while children are starving. And when he arrives at this, we're glad for him."

—from the foreword by Edward Field

George Bilgere has published three earlier books of poetry, The Going, Big Bang, and The Good Kiss. The Going (1995) received the Devins Award, honoring an outstanding first book of poetry. In 2002, U.S. Poet Laureate Billy Collins chose The Good Kiss as the winner of the University of Akron Poetry Prize, and awarded Bilgere, along with Katya Kapovich, the 2002 Witter Bynner Fellowship. His poetry has appeared in many literary journals and anthologies. He has received grants in poetry from the National Endowment for the Arts and from the Ohio Arts Council and has been twice nominated for a Pushcart Prize. George Bilgere was awarded the 2006 Ohioana Poetry Award for a body of published work that has made, and continues to make, a significant contribution to poetry, and through whose work as a writer, teacher, administrator, or in community service, interest in poetry has been developed. He lives in Cleveland, Ohio, where he teaches at John Carroll University.