The Life and Times of William H. Smart

by William B. Smart 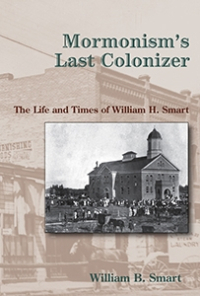 By the early twentieth century, the era of organized Mormon colonization of the West from a base in Salt Lake City was all but over. One significant region of Utah had not been colonized because it remained in Native American hands—the Uinta Basin, site of a reservation for the Northern Utes. When the federal government decided to open the reservation to white settlement, William H. Smart—a nineteenth-century Mormon traditionalist living in the twentieth century, a polygamist in an era when it was banned, a fervently moral stake president who as a youth had struggled mightily with his own sense of sinfulness, and an entrepreneurial businessman with theocratic, communal instincts—set out to ensure that the Uinta Basin also would be part of the Mormon kingdom.

Included with the biography is a searchable CD containing William H. Smart's extensive journals, a monumental personal record of Mormondom and its transitional period from nineteenth-century cultural isolation into twentieth-century national integration.

William B. Smart, a descendant of William H. Smart, is the coeditor, with Donna T. Smart, of Over the Rim: The Parley P. Pratt Exploring Expedition to Southern Utah, 1849-1850; and, with Terry Tempest Williams, of New Genesis: A Mormon Reader on Land and Community.