Understanding the Political Economy of Composition 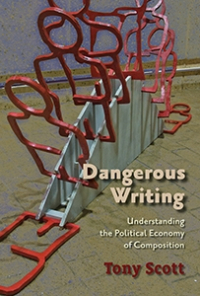 "While previous scholarship has examined this issue either from outside the discipline, or has focused solely on contingent labor within rhetoric and composition, this book by its wider purview and its knowledge of scholarship in rhetoric and composition, is able to make systemic connections to the discipline and is much stronger for that. It is a courageous book—'dangerous' in that it is a self-critique of the discipline that the author and reader share—and all the more important for that."

—James Zebroski, author of Thinking through Theory: Vygotskian Perspectives on the Teaching of Writing

"Composition faculty may see the women and men in their classrooms as 'students' and 'writers.' Market-minded administrators may call them 'clients' and 'consumers.' In Dangerous Writing, however, Tony Scott points out that a growing majority of our students are workers, logging in twenty or more hours each week at The Gap, Chili's, and UPS. Rather than ignore our students' working lives or assume that a college degree is the ticket out of a low-wage gig, Professor Scott urges us to imagine writing classrooms that foster a 'dialectic between the self that works in the service economy and the self that attends the university in search of a secure middle-class life.' What is potentially dangerous about such classrooms? When teachers and students together name, examine, and investigate terms of work—including the casualization of labor on which both The Gap and most American universities now depend—together they might also find creative ways to intervene, to rewrite the terms inside as well as outside the academy."
—Nancy Welch, author of Living Room: Teaching Public Writing in a Privatized World

Building on recent work in rhetoric and composition that takes an historical materialist approach, Dangerous Writing outlines a political economic theory of composition. In addition to work by others, Tony Scott also draws from two of his own studies—a classroom ethnography of an upper division writing class that was focused on labor and institutionality, and a qualitative study of the function of textbooks within a writing program. The book connects pedagogical practices in writing classes to their broader political economic contexts, and argues that the power of students' writing is prevented from reaching its potential by pressures within the academy and without that tend to wed higher education with the productive logics of "fast-capitalism."

Scott argues that the political economy has changed dramatically over the past three decades, and though some scholars have addressed those changes, the field as a whole has not developed an adequately rigorous discussion of what they have meant to our work as teachers, scholars and administrators.

The majority of postsecondary students are also already workers in an economy that has become less secure, more hostile to worker's rights, and more unequal in terms of wealth and power. Higher education has been subject to the same economic trends as the larger economy, and universities increasingly operate according to efficiency models that have led to, among other outcomes, increases in the use of contingent teaching labor and a corresponding standardization of curriculums.

Within writing programs, pragmatist responses to institutional and economic pressures create contradictions between the appearance and aims of writing education in scholarship and the material practice of teaching and writing in the classroom. Managerial tactics push practices in the field toward more easily commodified and administered pedagogies and away from the immediate, the creative, and the politically meaningful (and perhaps dangerous).

While previous work has described the exploitation of contingent labor in writing education, Dangerous Writing connects the problem with specific aspects of scholarship and pedagogical practice. By focusing on the structures of labor and of institutions that enforce those structures, Scott finds teachers and administrators are too easily swept along with the inertia of a hyper-commodified society in which students—especially working class students—are often positioned as commodities, themselves. Dangerous Writing, then, is a critique of how productive labor is shaped in writing programs as much as it is a critique of capitalism. Ultimately, Scott's eye is on the institution and its structures, and it is these that he finds most in need of transformation.

Present Tense: A Journal of Rhetoric in Society

Tony Scott is associate professor of writing and rhetoric at Syracuse University where he directs the writing program. He is the author of Dangerous Writing: Understanding the Political Economy of Composition and coeditor of Tenured Bosses and Disposable Teachers.