Imagining the American West as the Orient 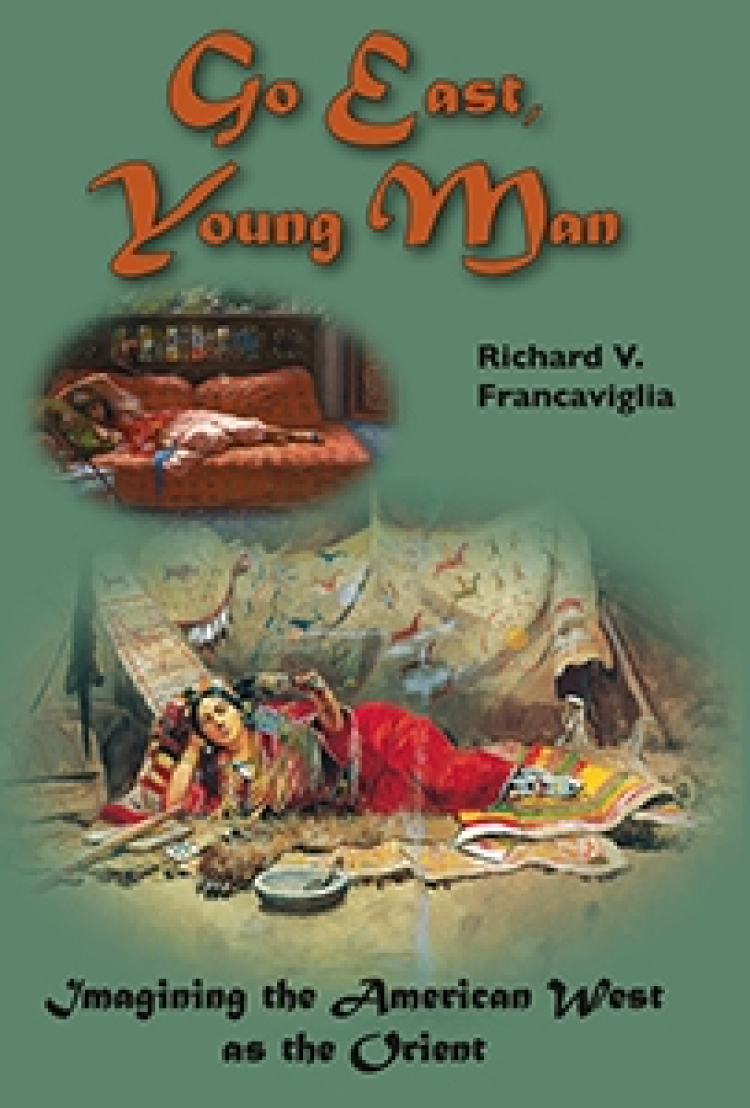 "Thoughtful, provocative, and important. Go East, Young Man is definitely a valuable contribution to scholarship on the American West, as well as to the fields of historical geography and popular culture. It has the potential to become a very important book."
—David M. Wrobel, author of Promised Lands: Promotion, Memory, and the Creation of the American West

"[Francaviglia's] book is of great value, particularly in its illuminating showcasing of the degree to which the American West was consistently compared to aspects of the Middle East, from desert sands and rock formations to camel caravans and mirages. These comparisons helped to establish the West as an exotic locale, markedly different from the Europe-focused eastern half of the country and having a fascination of its own."

Transference of Oriental images and identities to the American landscape and its inhabitants, especially in the West—in other words, portrayal of the West as the "Orient"—has been a common aspect of American cultural history. Place names offer notable examples—think of the Jordan River or Pyramid Lake—but the imagery and its varied meanings are more widespread and significant. Understanding that range and significance, especially to the western part of the continent, means coming to terms with the complicated, nuanced ideas of the Orient and of the North American continent that European Americans brought to the West. Such complexity is what historical geographer Richard Francaviglia unravels in this book.

Since the publication of Edward Said's book Orientalism, the term has come to signify something one-dimensionally negative. In essence, the Orientalist vision was an ethnocentric characterization of the peoples of Asia (and Africa and the "Near East") as exotic, primitive "others" subject to conquest by the nations of Europe. That now well-established point, which expresses a postcolonial perspective, is critical, but Francaviglia suggests that it overlooks much variation and complexity in the views of historical actors and writers, many of whom thought of western places in terms of an idealized and romanticized Orient. It neglects positive images and interpretations to focus on those of a decadent and ostensibly inferior East.

We cannot understand well or fully what the pervasive Orientalism found in western cultural history meant, Francaviglia contends, if we focus only on its role as an intellectual engine for European imperialism. It did play that role as well in the American West. One only need think about characterizations of American Indians as Bedouins of the Plains destined for displacement by a settled frontier. Other roles for Orientalism, though, from romantic to commercial ones, were also widely in play. In Go East, Young Man, Francaviglia explores a broad range of Orientalist images deployed in the context of European settlement of the American West, and he unfolds their multiple significances.

Richard V. Francaviglia is professor of history and geography and director of the Center for Southwestern Studies and Cartography at the University of Texas at Arlington. His books include Mapping and Imagination in the Great Basin, Go East, Young Man, Over the Range and "Like the Hajis of Meccah and Jerusalem". Working on the Railroad, Walking in Beauty

A History of the Promontory Summit Route of the Pacific Railroad

Coal in Our Veins