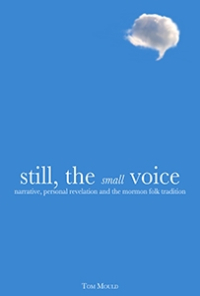 "Tom Mould is a remarkable scholar. He knows his Mormon sources better than many Mormon researchers, and he is fully conversant with trends in folklore scholarship. A number of us have published Mormon folklore studies, but no one has worked seriously with personal revelations and no one has taken the theoretical and methodological approach Tom takes. This is an excellent book—wonderfully researched, engagingly written. His work will make a substantial contribution to Mormon folklore studies, and to Mormon studies as well."
—William A. Wilson, author of The Marrow of Human Experience

"Tom Mould is that curious, respectful, and probing researcher illuminating a tradition of sharing faith-based personal revelation narratives. Throughout, Mould weaves social and church history, trends and development, to give a broad background for the material. His work analyzes the complexity of experiences, performances, contexts, histories, and meanings, and leaves the reader with a greater understanding of the power of the spoken word."
—Anne F. Hatch, Journal of American Folklore

Still, the Small Voice is a folklorist's examination of the everyday narratives Mormons recount concerning their personal encounters with the divine. Through close consideration of these narratives as shared with fellow church members and non-members alike, Tom Mould gets to the heart of Mormon religious culture.

Personal experience narratives of encounters with the supernatural are a pervasive aspect of the communal religious experience of Mormons, as individual church members use them to recount their personal revelations, received primarily through the Holy Ghost. Members of the Church of Jesus Christ of Latter-day Saints find guidance and assurance in such inspiration, promptings, and warnings and often narrate them to each other as mutual confirmation of shared belief.

In accordance with current emphases in folklore studies on narrative, performance, and belief, Tom Mould uses ethnographic research as well as deep study in archival records and published accounts to thoroughly analyze these spiritual narratives and their performances and thereby open windows into the interior of Mormon folk culture. Seeking as though an insider to understand and respect the belief systems he studies, Mould considers how people within Mormon communities both frame and explain their experiences with the divine by means of the narratives they share with group members. In doing so he provides a significant new ethnographic interpretation of Mormon culture and belief. He goes further, though, and applies his findings directly to broader folkloristic questions regarding performance, genre, personal experience narrative, belief, and oral versus written traditions—in each case illuminating and expanding discourse on these topics in fresh, insightful ways.

Tom Mould is associate professor of anthropology and folklore at Elon University and director of Elon's Program for Ethnographic Research and Community Studies (PERCS). He is the author of two books on Choctaw narrative—Choctaw Prophecy: A Legacy of the Future and Choctaw Tales—and has published on issues of generic boundaries and constructed identities, particularly in the study of oral narrative. He has also produced video documentaries for public television on folk art and culture in Indiana, Kentucky, and North Carolina. His interest in prophecy and sacred narratives led him to his work with Latter-day Saints, work that continues in his forthcoming co-edited book project Latter-day Lore: A Handbook of Mormon Folklore Studies.