The Intersections of Race and Class for Women in Academia 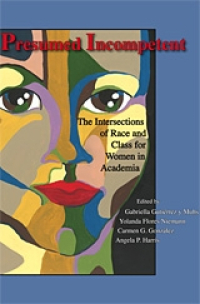 "Women in academia still face obstacles built up over centuries, but the contributors to Presumed Incompetent have taken a leap toward liberation. Their revelations will enrage you—and open minds and hearts."
—Gloria Steinem

"Presumed Incompetent is undeniably a path-breaking book full of stories of resilience and survival. The editors of this magnificent collection attest to the power of storytelling and add to the testimonios of women in academia such as Telling to Live and Paths to Discovery. Each and every one of the authors survived and in telling their stories they offer hope and solace for young women scholars entering the academy."
—Norma E. Cantú

"This book felt so painfully familiar I almost could not read it. Those of us who started our careers as firsts and onlys have had to forget much about the cruelty hidden in academic enclaves. Forgetting, a means of surviving, buries pain and erases history, leaving us morally and intellectually flimsy. Thanks to these women for taking the harder path of truth-telling."
—Mari Matsuda

"Exploding the myth that we live in a "post-identity" world, Presumed Incompetent provides gripping first-hand accounts of the ways in which women faculty of color are subjected to stereotypes, fears and fantasies based on the intersection of race, gender, and class. It reminds us that the mere passage of time is not enough to create equitable workplaces for anyone facing institutional subordination."
—Kimberlé Crenshaw

"Presumed Incompetent is an absolute must read for anyone who is thinking of entering academia, for junior faculty but also senior scholars alike.... it is crucial we learn from Presumed Incompetent and implement its recommendations in our positions of power and influence."
—The Feminist Wire

Presumed Incompetent is a pathbreaking account of the intersecting roles of race, gender, and class in the working lives of women faculty of color. Through personal narratives and qualitative empirical studies, more than 40 authors expose the daunting challenges faced by academic women of color as they navigate the often hostile terrain of higher education, including hiring, promotion, tenure, and relations with students, colleagues, and administrators. The narratives are filled with wit, wisdom, and concrete recommendations, and provide a window into the struggles of professional women in a racially stratified but increasingly multicultural America.

In June 2014, the Berkeley Journal of Gender, Law and Justice published an entire edition dedicated to responses to Presumed Incompetent. Volume 29, Issue 2 consists of the first part of a series of papers presented at a daylong symposium at the University of California, Berkeley, School of Law on March 8, 2013. The Berkeley Journal of Gender, Law & Justice hosted more than forty speakers who were invited to celebrate and respond to the book. The entire journal and all its contents are offered free and open access by the Law Journals and Related Materials at Berkeley Law Scholarship Repository. Volume 12, Issue 2 of the Seattle Journal for Social Justice consists of the second series of symposium papers, and is offered free and open access by The Seattle University School of Law Digital Commons.

Yolanda Flores Niemann (PhD, Psychology, University of Houston, 1992) is professor of psychology at the University of North Texas.

Gabriella Gutiérrez y Muhs (MA and PhD, Stanford University, 2000) is Theilene Pigott McCone Chair for the Humanities and professor of modern languages and women studies in the Women, Gender and Sexuality Studies Department at Seattle University.