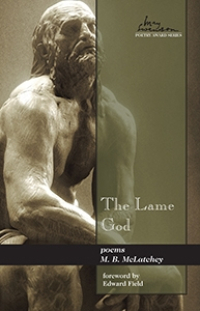 Volume 16 of the May Swenson Poetry Award Series, 2013

"It is a hard fact that, to the artist, everything is material. We grit our teeth and use even the most personal catastrophes—our own and those of others—to make art. This is what the Classical authors did, and this is what M. B. McLatchey has done with her great subject in this book. The effect is powerful, and ultimately, The Lame God proves that if our traumatic experiences don't destroy us, they can produce masterful works, in which human nature rises to its heights."
—From the foreword by Edward Field, American poet and essayist, and judge for the 2013 Swenson Award

"This book is crushing and brilliantly written. If ever there were a time for McLatchey's deeply moving and compassionate poems, it is now with the crazed, unchecked violence against our children. There are no elegies here, only a powerful intellect at work and a truly gifted poet's heartbreaking songs to our lost children."
—Jeffrey Greene, author of Beautiful Monsters

"Like the mockingbird's cry of loss in Whitman's "Out of the Cradle," a haunted music echoes throughout this wrenching sequence. Whether invoking myth or late night TV, the horrific scenario of a child's abduction and murder and the aftermath—experienced through a family's, especially a mother's eyes—is never less than convincingly presented. With considerable technical flair, M.B. McLatchey in The Lame God reminds us of what poetry can be at its best: a supreme act of imagination and empathy."
—Peter Schmitt, author of Renewing the Vows

"These poems tore me up, and they will you, too, but never does McLatchey sentimentalize. Instead, here are lines informed by an intelligence rarely heard today as the voice of a grieving parent crying out to the gods finds its echo, but little solace, in the immortals of classical myth. A painfully beautiful debut collection!!"
—Bruce Guernsey, former editor of The Spoon River Poetry Review and author of From Rain: Poems, 1970-2010

"In magisterial cadences, this powerful poetic sequence gives voice to the unspeakable and transposes profound grief into immortal song. McLatchey's poems are talismans and spells—not against loss but against forgetting."
—Philip Brady, author of Fathom and co-founder of Etruscan Press

"This is a book, when considering the soul chamber from which these poems must have originated, about the world-without-end quality to grief and the unresolved heart. It resists every easy answer and courts every dangerous and heavenly prayer."
—Michael Klein, author of The Talking Day

In The Lame God, author M. B. McLatchey reminds us of the inevitable bond between art and empathy. With a controlled language that finds its echo chamber in the immortal themes and characters of classical literature, this courageous work accompanies the author on her journey through a parent's anguish in the face of a horrific crime. Using the art of poetry she gives voice to a suffering—and a love—that might otherwise go unheard.

The May Swenson Poetry Award, an annual competition named for May Swenson, honors her as one of America's most provocative and vital writers. During her long career, Swenson was loved and praised by writers from virtually every school of American poetry. She left a legacy of fifty years of writing when she died in 1989. She is buried in Logan, Utah, her hometown.

M. B. McLatchey holds degrees in comparative literature and languages, in teaching, and in English literature from Harvard University, Brown University, and Williams College, as well as an MFA in creative writing from Goddard College. A widely published poet and scholar with an extensive background in literature, philosophy, and ancient and modern languages, she has received numerous awards. Her most recent poetry awards include the American Poet Prize from The American Poetry Journal, the Annie Finch Prize for Poetry, the Spoon River Poetry Review's Editors' Prize, and the Vachel Lindsay Poetry Award. She is currently a professor at Embry-Riddle Aeronautical University in Daytona Beach, Florida. Visit her website.