The Future is Mestizo 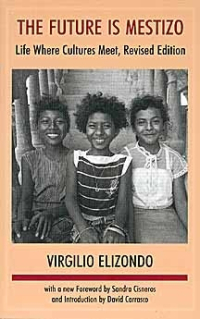 "The work of Virgilio Elizondo, a priest from the USA of Mexican ancestry, is most timely. The first merit of The Future Is Mestizo is that . . . it embraces all the aspects of the human being: the cultural as well as the political, the social and especially the religious, which is in effect the ultimate dimension of life. Having done this, Virgil Elizondo is able to bring about, little by little, a biographical and poetic romance, a political study and finally a religious philosophy."

"Virgilio Elizondo is the most prominent U.S. Hispanic theologian. What Gustavo Gutiérrez is to Liberation Theology, Elizondo is to U.S. Hispanic Theology. His contention is that the cultural conditioning of a people is not just an aid to the proclamation of the gospel, but the medium through which God chooses to reveal himself. Elizondo offers a distinct Hispanic perspective on Jesus as a mestizo. Elizondo's work is a solid, creative, and insightful voice from within the Mexican-American reality."

"Like the Chinese dicho, we are blessed to be living in interesting times, on the border of the new mestizaje. As one member of this exciting movimento nudging and being nudged into the future, I am delighted to have discovered this book. I have seen the new millennium and the future is us."
—Sandra Cisneros

Twelve years after it was first published, The Future is Mestizo is now updated and revised with a new foreword, introduction, and epilogue. This book speaks to the largest demographic change in twentieth-century United States history—the Latinization of music, religion, and culture.

Virgilio Elizondo, founding and former president of the Mexican-American Cultural Center and former rector of San Fernando Cathedral in San Antonio, Texas, is an internationally known theologian and teacher. A professor of theology at the University of Notre Dame and University of California at Santa Barbara, he is the author of Christianity and Culture and Galilean Journey.