The Shopping Mall as Ceremonial Center 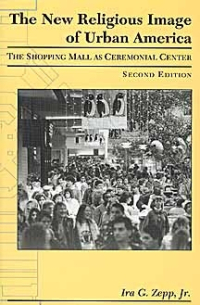 "[Zepp] has treated the malling of American in a way that would simply not have occurred to any of the professional urbanists who plan such complexes—rather as if an ornithologist had thrown entirely new light on the sparrow instead of studying some exotic denizen of the Amazon."
—Paul Wheatley, The University of Chicago, School of Social Thought

The only book that deals with the religious dimensions of malls. First published in 1986, it has been updated and expanded to include a new chapter on airports and ballparks as forms of the mall, and it also now includes a critical response.