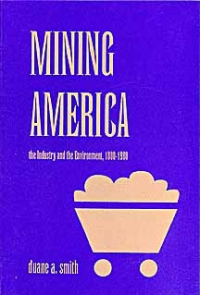 "[A] well-documented survey . . . of the destructive impact of American mining practice upon the environment, and of the increasing public and political reaction to the devastation that mining produces. In a time when there is more heat than light generated upon the subject, it is a pleasure to note that the author has remained fair and dispassionate."
—Western Historical Quarterly

"This book presents, in rich detail, the first balanced portrait of the clash between the world of the profit-oriented, individualistic mining man and the cosmos of the environmental worshipper. . . . It is an important book, a powerful book, a book of optimism and sanity . . . coming from one of our most able historians of the American West."
—Gene Gressley, American Heritage Center, University of Wyoming

Throughout the nineteenth century, miners were given virtually free rein to profit without having to worry about impacts to the land, water, and air. But during the twentieth century, the mining industry has evidenced serious concerns about its effects on the environment.

Since the 1960s, mining and its consequences have become heated issues of public debate and legislative reform. By the mid-1970s, a number of industry hard-liners were still clinging to nineteenth-century values, but many more were accepting the legacy of mining's past and were beginning to integrate preservation and reclamation into their plans.

Mining America is a vivid account of the damage wrought by almost two centuries of mining, but its main focus is on the conflicting attitudes behind the destruction and on society's responses. Veteran author and historian Duane Smith asserts that the marriage of mining and environmental issues was bound to touch America's sensitive pocketbook nerve—but the question now is, are all groups willing to pay the price?