The Story of Caribou, Colorado 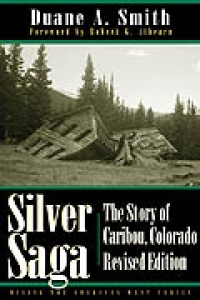 "[Smith's] contribution gains stature with the realization that better-known camps such as Virginia City and Tombstone were atypical while the Caribous of the West were probably the norm."
—Western Historical Quarterly

"A complicated tale with much mining and financial crossruffing, which Smith has mastered by his diligent, widespread research."
—Caroline Bancroft, The Colorado Magazine