by David A. Wolff 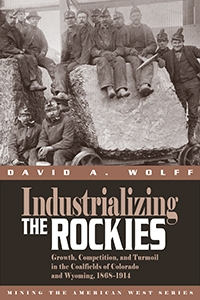 The two defining moments of Western coalfield labor relations have been massacres: Wyoming's Rock Springs Massacre of 1885 and Colorado's Ludlow Massacre of 1914. But it wasn't just the company guns that were responsible for the deaths of 28 Chinese coal miners and 13 women and children. It was the result of racial tensions and the economics of the coal industry itself.

In Industrializing the Rockies, David A. Wolff places these deadly conflicts and strikes in the context of the Western coal industry from its inception in 1868 to the age of maturity in the early twentieth century. The result is the first book-length study of the emergence of coalfield labor relations and a general overview of the role of coal mining in the American West.

Wolff examines the coal companies and the owners' initial motivations for investment and how these motivations changed over time. He documents the move from speculation to stability in the commodities market, and how this was reflected in the development of companies and company towns.

Industrializing the Rockies also examines the workers and their workplaces: how the miners and laborers struggled to maintain mining as a craft and how the workforce changed, ethnically and racially, eventually leading to the emergence of a strong national union. Wolff shines light on the business of coal mining detailing the market and economic forces that influenced companies and deeply affected the lives of the workers.

David A. Wolff is assistant professor of history at Black Hills State University.