Hard as the Rock Itself

Place and Identity in the American Mining Town 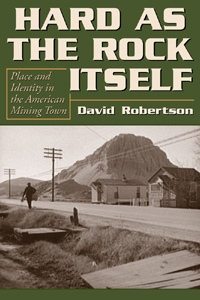 "This is a scholarly book that explores from several cultural geographic perspectives a fascinating class of postproduction primary industrial landscapes in the United States. . . . [Readers] will in particular appreciate its appropriateness for researching and teaching the 'sense of place' concept. This book can motivate critical thinkers and those interested in the history of geographic thought and current trends to discuss changes in cultural geographic practices and goals over the past several decades: their causes, their outcomes, and their implications."
—The Professional Geographer

"Much of the literature about mining emphasizes its negative aspects such as pollution and landscape degradation. This book, however, is different. . . . one should be impressed by how tenacious the former mining population can be—and how deeply the mining experience can affect attachments to the land, even though outsiders may consider that land 'ruined.' Written with restraint and remarkable objectivity, Hard as the Rock Itself is highly recommended to anyone interested in mining history, environmental history, or simply how life and landscape are interconnected."
—Richard V. Francaviglia, Montana: The Magazine of Western History, Winter 2006

"[A] compact, well-written, and very completely referenced book. For readers seeking a way to communicate the notions of place identification, heritage, memory, and the value of 'common' individual survivors of a physically brutal extracting industry, this book is a gold mine of style, fact, and story telling. This book is a positive addition to the study of community change, cultural geography, and mining in America. It is well documented, cleanly illustrated with black and white photographs and maps, and reads easily. Terms and definitions are explained in context. This book is a most enjoyable and stimulating read."
—Ralph K. Allen, Jr., Journal of Cultural Geography

"I advise American cultural geographers especially to move this provocative landscape study to the top of their reading lists. . . . [Robertson's] wise and effective use of archival materials and active interviews enabled the inhabitants of these mining towns to 'speak for themselves' of their own 'sense of place.' . . . [G]iven the diverse background and training of its author, Hard as the Rock Itself provides a watershed example between traditional and 'new' cultural geographies in the United States."
—David J. Nemeth, The Professional Geographer

"Combining the tools of landscape history and cultural geography, and utilizing a wonderfully rich set of personal interviews, Robertson's book presents three detailed case studies of three very different post-mining communities where he uncovered some answers in similar stories of economic boom, economic decline, deindustrialization, and community persistence. . . . Robertson's book does a masterful job of balancing the multiple and often contending perspectives that make claims on these mining landscapes without diminishing or belittling any of them."
—Kent Curtis, Environmental History

The first intensive analysis of sense of place in American mining towns, Hard as the Rock Itself: Place and Identity in the American Mining Town provides rare insight into the struggles and rewards of life in these communities. David Robertson contends that these communities—often characterized in scholarly and literary works as derelict, as sources of debasing moral influence, and as scenes of environmental decay—have a strong and enduring sense of place and have even embraced some of the signs of so-called dereliction.

Robertson documents the history of Toluca, Illinois; Cokedale, Colorado; and Picher, Oklahoma; from the mineral discovery phase through mine closure, telling for the first time how these century-old mining towns have survived and how sense of place has played a vital role.

Acknowledging the hardships that mining's social, environmental, and economic legacies have created for current residents, Robertson argues that the industry's influences also have contributed to the creation of strong, cohesive communities in which residents have always identified with the severe landscape and challenging, but rewarding way of life.

Robertson contends that the tough, unpretentious appearance of mining landscapes mirrors qualities that residents value in themselves, confirming that a strong sense of place in mining regions, as elsewhere, is not necessarily wedded to an attractive aesthetic or even to a thriving economy.

Mining historians, geographers, and other students of place in the American landscape will find fascinating material in Hard As the Rock Itself.

David Robertson is an assistant professor of geography at the State University of New York at Geneseo.